This map was drawn after the March Annexation (Anschluss) of Austria by artist Richard Yardley for the new American magazine “Ken”, first published on April 7, 1938. It is entitled “A Map of Herr Hitler’s Heaven, drawn with undiplomatic, but fervent hopes that it won’t happen here.” Alas, the artist's hopes did not come true: the growing appetite of the Third Reich led to a worldwide conflict. Right before the start of the war, in August 1939, “Ken” was also closed: the editors got persecuted for leftist publications.

In the center of the map, an SS man pushes a Nordic idol of a new ideology towards Berlin, on which there is a sign that says “10 marks fine for not looking happy”. Hitler happily chained Austria to a peg, claiming that it was an exclusively cultural connection. Nazi propaganda is pouring on Czechoslovakia, and German and Czechoslovak soldiers are warily staring at each other across the border.

While Poland has grown a second head, trying not to miss the threat from two sides, Czechoslovakia continues to have fun. The affair between Ukraine and Russia has not yet finished, and Danzig, signed as a «sore spot», is under German pressure. In the north, a Danish socialist cow looks disapprovingly at Germany, the carefree France and Switzerland wanton away life in the south, and somewhere behind the Alps rules Mussolini.

Inside Germany, with prisons and concentration camps scattered over the country, happy workers throw one hand in a Nazi salute and tighten their belts with the other — they are not allowed to go on strike. Somewhere nearby is a large book festival — books are being burnt. Citizens have to wear smoked glasses, so as not to go blind at the sight of Göring, and special factories continue minting new medals. A joyous volunteer is urged forward by bayonet prodding to fight in Spain, a puzzled burgher makes ersatz-clothes of wood for his frau, in Tyrol people dance fancy folk dances, and above all that floats the cloud of lies of Goebbels propaganda. Great Britain and the USA are not shown. 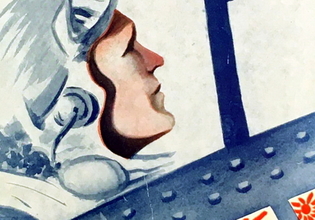 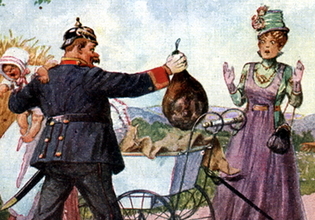