Fantasies regarding WWII era armour in the areas of technical capabilities and application in combat, both of tanks that existed and those that never made it off paper (or were never even planned at all), are very widespread. A popular category of these fantasies concerns tank destroyers on the chassis of German superheavy tanks, e.g. E-100. Do any of them actually have a basis in reality?

The E-100 and Maus superheavy tanks are some of the most worshipped idols among German armour. The fact that the development of both was stopped by a personal order from Hitler in July of 1944 does not stop many from believing that both monsters could make it to mass production. In reality, the fate of the Maus was sealed when the Allies bombed Krupp's factories and there was nowhere left to produce the tank. The E-100 was never fully assembled and never moved under its own power, nor was a contractor determined for its production.

Tank destroyers on the chassis of the E-100 and Maus tanks are another topic. Information on these vehicles is quite incomplete which gives fertile soil to wild fantasies. One of the most hyped up examples at present is the imaginary E-100 Krokodil.

Thanks to French artist Hubert Cance who drew this tank destroyer in two variants (149 and 173 mm guns) for the 22nd issue of Batailles & Blindes magazine published in November of 2007, the mythical project took shape. It went as far as the creation of scale models by very serious plastic model companies based on the artist's projections. The fact that the vehicle would break down every 10 kilometers from the strain on the front road wheels clearly did not occur to him.

Meanwhile, tank destroyers on the E-100 and Maus chassis were indeed planned, but information on them is scarce. Nevertheless, even scraps of archive data allow us to lift the veil off the heaviest and most armoured tank destroyer in the world.

In late March of 1944, the Krupp design bureau developed two guns: the 15 cm StuK L/63 and 17 cm StuK L/53. According to calculations, both could penetrate 200 mm of armour at 4 kilometers. It is not known who the intended target for these monsters was, but both guns appear in Guderian's report detailing potential developments on April 7th, 1944.

The designation of both guns dictated that they were meant for SPGs. These guns could potentially be installed on relatively light Panther or Tiger based vehicles, but in reality only one carrier was built, the 17 cm Kanone 72 (Sfl) Geschuetzwagen Tiger otherwise known as Grille 17. The choice of chassis for gigantic anti-tank guns remained open.

Around the same time that Krupp proposed projects for superheavy guns, activity around the superheavy Maus tank resumed, simultaneously with its rival, the E-100, the 140 ton superheavy tank from Adlerwerke. In practice, Adler proposed a redesign of the 1942 Tiger-Maus project, developed by Krupp and cancelled in favour of the Maus. Even the turret used in the blueprint is the Maus turret from January 1st, 1943, also proposed for the Tiger-Maus. This blueprint has notes on two guns, 15 cm and 17 cm. In order to not breed any illusions, let me state that this does not mean anyone had plans to install these guns in this tank.

An American CIOS report sheds light on this note. It states that German engineers did consider the E-100 as a potential platform for 149 mm and 173 mm guns. It also states that the results of their calculations were disappointing: these guns could be squeezed in, but the turret would have to become immobile. The aforementioned turret design was not even considered.

In April of 1944, Krupp started work on a new simplified turret, known as the Maus II turret. The E-100 version had its mass reduced to 35 tons by reducing the thickness of side armour to 80 mm. The 128 mm KwK L/55 would be the main gun on both turrets, with a secondary 75 mm KwK L/24. A rangefinder was also added to both turrets, with the axis of rotation of this pairing directly next to it. It's interesting how a more powerful gun was supposed to fit into such a tight space.

Initially, the E-100 was not a serious option for a superheavy tank destroyer. Its design was not even finished, but the Maus was already undergoing trials, and was a suitable vehicle. Correspondence mentions a draft of an assault gun on the Maus chassis that were delivered to Krupp and Porsche on May 9th, 1944, but sadly, the blueprints did not survive to this day. The 15 cm StuK L/63 was chosen as the main weapon. It was also suggested that a 30 mm automatic AA gun should be added to the top of the Sturmgeschutz Maus, but the idea was rejected on the assumption that the vehicle would be accompanied by SPAAG vehicles.

The lifetime of the Maus assault gun was not long. While work was being done, it was discovered that the height of the vehicle would exceed the railroad limit. Even if the AA turret was removed, the problem remained. As a result, the Maus project fell apart, and the E-100, whose chassis was much lower, came into play. By the way, the unsolvable problem faced by Krupp and Porsche engineers directly indicates that any fantasies with a Jagdpanther-like fighting compartment are completely unfounded.

On May 29th, 1944, Krupp requested permission for the development of draft documentation for a 1:5 scale model of 149 mm and 173 mm guns on the E-100 chassis. As with the Maus, the 149 mm gun received higher priority. The gun was redesigned, and its length reached 68 calibers. The blueprint for the 15 cm StuK L/68 on the Sturmgeschutz E-100 was ready on July 4th, 1944. The design of the gun was very similar to that of the 12.8 cm KwK L/55, meant for the Maus and E-100. The guns had an identical recoil mechanism, among other components. As for the vehicle itself, no blueprints remain. However, the slope of the front armour plate on the gun mount blueprint dispel any possibility of a front fighting compartment, same as with the Maus.

The CIOS report casts a light on this project as well. According to the report, it became obvious that the tank will not meet requirements before the project was done. This fact did not stop the creators, and the tank was partially assembled. In parallel with trying to revive the E-100 as a tank, work continued to convert it to a tank destroyer. The tank would receive a fixed casemate instead of a turret. According to CIOS data, engineers also altered the tank's layout. The transmission, as well as the drive wheels, were moved from the front to the rear. Sadly, no blueprints of the StuG E-100 remain, but based on the conversions, it was likely that it would end up looking like the Ferdinand.

According to available documentation, the StuG E-100 1:5 scale model was finished and shown to Guderian. However, the project was doomed. On July 10th, Hitler ordered the cancellation of all superheavy tanks and SPGs on their chassis. This did not stop Krupp from continuing to work on assembling the E-100 half-legally and, in parallel, preparing 6 hulls and turrets for the Maus, but there was no possibility of further projects. The superheavy tank destroyer died without seeing the light of day. 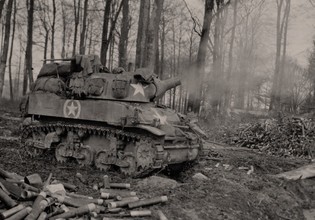 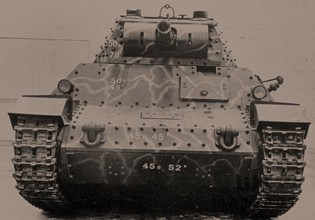 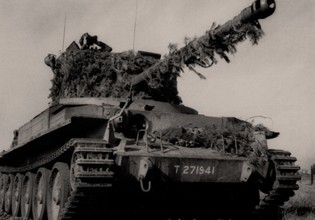