Christmas under the periscope

The Submariners are unusual and eye-catching people. Many ideas about their life are taken from feature films, which can sometimes show unusual episodes. Thus, in the old Soviet film ''Commander of the Lucky Pike'' there is a scene of the crew celebrating the birthday of their comrade, passing under the enemy’s depth charges. At the same time, there is no such moment in the cult German movie ''Das Boot'', which seems to show all aspects of Kriegsmarines submariners life. Were there any holidays on German submarines while they were at sea during World War II?

To find out how it was, we will use the records from the operational logs of the German submarine U 123. We will also use the book «Operation Drumbeat», written by American historian Michael Gannon. Let's rewind the time three-quarters of a century back and return to December 24, 1941. The day when the submarine’s commander, Lieutenant Commander Reinhard Hardegen decided to celebrate Christmas directly on board of his ship during a war patrol. The pages of the logbook dryly narrate the following about the event:

«Christmas on the submarine in the Bay of Biscay. Christmas trees were installed in all compartments and decorated with lights by the crew. The real trees have been replaced with artificial ones. After the ceremony and dinner, the team was given letters from home and gifts. Then the celebration continued in the compartments from where the Christmas songs were heard».

However, if we dilute these dry lines with the memories of eyewitnesses, which were described in Michael Gannon’s book, you can learn many interesting details about this unusual holiday as an element of the everyday life of German submariners. According to the stories told by the participants, everything happened as follows.

The commander of U 123 hoped that he and the crew would be able to celebrate Christmas at the base. Having received the order to get prepared for going to the sea, the commander managed to provide the celebration on the board. He had devised an ingenious plan on how to keep the spirit of the team, who were upset about going out on New Year's Eve. Having waited a day after leaving the base, at noon on December 24 the commander announced an urgent dive, and when the submarine reached the 65 feet down, turned to his crew over a speakerphone.

Having heard «The Commander is speaking», the submariners tensed, prepared to hear something important about the combat mission. But in a few moments the worrying on their faces was replaced with amazement. Hardegen informed that the crew is going to celebrate Christmas and therefore the submarine will spend several hours at the depth so the holiday would go unchallenged. He wants it to be as happy as it could be on the submarine. All crew members who were not occupied with the watch were ordered to assemble in the central compartment.

After the crew assembled it was announced that the supplies had provided trees for each compartment and in a few minutes the Petty Officers will start to give them. The biggest spruce should be installed in the central post. After it is installed, the electricians will decorate it with electric garlands. In addition, the submariners learned that navigator had found delicious muffins in the warehouse and the cook is cooking a real cake. But it was not the end of surprises. The commander informed that after the lunch the Watch Officer Horst von Schroeter, temporarily acting as a Knecht Ruprecht – the assistant of St. Nichola in German folklore, will hand out letters from home and gifts. Commander jokingly warned: «But remember, if you were a bad boy, he will punish you!»

The commander’s idea was a success: the news about gifts greatly encouraged the crew. Hardegen understood that there was nothing more pleasant than a gift and news from relatives on Christmas. Being a good psychologist, he struck another unexpected «blow» and the sub-marines were very surprised having heard the following:

«And finally, the last surprise. You know that unlike some other Commanders, I did not allow drinking alcohol on my submarine. On other submarines, there is a tradition of a «victory bottle», which is given to a team after a successful attack. And I do not condemn them, but that is not my method. However, this Christmas I will turn away from my principle and allow everyone to have a portion of red wine punch! Our mechanical engineer, who is familiar with drinks, will do it!»

Vladimir Nagirnyak
/
What the “Dönitz’ grey wolves” were eating?
Life of German submariners of the Second World War

The commander ended his speech with the fact that due to the absence of a priest on the board, the Christmas service would not be held, and declared the celebration open. The submarines went to living quarters, where messengers led by the cook, began giving away the Christmas meal. The process looked the next way: the cook was walking ahead with a big steaming bowl and ladle, putting stewed beef with vegetables into the plates. He was followed by messengers, who were giving pieces of cake, muffins, fruit, and lemonade. For those who wanted coffee, the cook prepared it according to his own recipe. It was not so strong and much tastier than the hellish drink he cooks for the mid watch to give energy and cheerfulness during the watch out on the bridge.

The sailors were sitting in compartments, set up as comfortable as possible for such a celebration — on bunks, boxes, and even on the deck. The lunch on Officer’s and Petty-Officer’s compartments was served on dishes placed on special tables with racks and sides so that the dishes would not fly overboard during the roll. With coffee the cook served his signature dish — classic Berlin donuts stuffed with fruit jelly.

But the crew was waiting for another… And finally, Heinz-Walter Schulz, the mechanical engineer of U 123, came with his assistants, who carried huge bottles. The punch turned the lunch from an ordinary one to a real holiday and improved everyone’s mood. The submariners knew that it will be the last alcohol dink for them for the next four or six weeks, while the submarine is in the sea. That is why they took the punch with reverence, savoring it from their cups and taking time to enjoy it.

Gifts, delicious food, letters from home, and punch did the trick — the crew forgot about the war for several hours. The sounds of accordion started coming out from the central post, filled the steel pipe put into the depths of the sea with Christmas songs. The main tree on the submarine attracted submariners. The crew one-by-one or in groups were standing in the central post, fascinated by its sight and smell. As some of them recalled later, at that moment their thoughts were at home, remembering a Christmas tree decorated with real candles, toys, and apples.

Most of all, the sounds of accordion touched the radist and two motorist Petty Officers. They were on the post and were not able to leave the watch and join others to enjoy the celebration. A service is a service and they have patiently waited for the end of the watch for a change and take a part in the holiday.

At seven PM, when the Commander ordered them to surface, the magic for the crew was over. The tanks were blown out and the submarine appeared on the surface. The noise of the running diesels reminded people about the war, snatched the crew out of the Christmas charm. However, those few hours remained in the memory of the team forever, and they were grateful to the Commander for such a Christmas in the Atlantic Ocean. Reinhard Hardegen was pleased with the realization of his plan. It is confirmed by a record he made in the logbook: «The crew forgot about the war for a few hours, thanks to a simple but effective Christmas celebration.»

The commander of U 123 managed to make a real ceremony according to all the rules on the board. It would be interesting to continue the story of the Christmas celebration on submarines of other fleets. Unfortunately, the memoirs of submariners do not replete with such details.

One short mention of the holiday was found: the commander of the British submarine «Sealion» (HMS Sealion) Benjamin Bryant described the celebration of Christmas aboard his ship as follows:

«We decided to create a holiday atmosphere during the operational patrol on Christmas 1939. We have created Christmas decorations, pulled paper caps over our heads, and held a race of wind-up cars around batteries. Someone in the wardroom had the idea to put a thermometer in the mouth to represent a cigarette, as smoking was prohibited at the depth».

Probably, the submariners are unusual people, who are able not only to take the hardship with the smooth, being in the steel belly of a submarine for months, but also able to eat a cake at the time of depth charges explosion, or sing songs near the Christmas tree on the depth of the sea. And maybe everything is much simpler, and they are ordinary people who miss home and peaceful life? 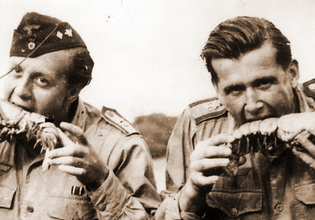 The last U-boats of the Kriegsmarine