An old military saying states that «every army prepares to fight the previous war». That is how the French generals acted when planning new anti-tank guns. Thinking about enemy tanks, they envisioned clumsy boxes, crawling across the battlefield at a pedestrian's pace, protected with several centimeters of armour. To fight them, a small gun was needed, one that could be easily hidden on a crater-pocked field and pushed around with just the strength of the crew. The result of this line of thinking was the 25 mm anti-tank gun model 1934, Canon 25 mm S.A. Mle 1934.

Its story begins before the end of WWI, when the well known Hotchkiss company began designing a new tank gun. Since the war ended, the project was mothballed, but suddenly came up again in the early 1930s, when the French army was looking for a new anti-tank gun. By putting the failed anti-tank gun on a wheeled mount with deployable trails and a small shield, the company ended up with a small and cheap anti-tank gun, and a decent one at that. The prototype, produced in 1933, successfully passed trials. The gun was accepted into service as the Canon 25 mm S.A. Mle 1934, or 25 mm semi-automatic gun, model 1934. Hotchkiss received their first order for 200 units in 1934.

Compared to its field artillery «sisters», the 25 mm anti-tank gun looked like a toy due to its small size and mass. Its designers took a number of steps to make the gun easier to hide on the battlefield. The top of the gun shield was wavy (straight lines are easier to see) and the barrel was equipped with a flash suppressor. The gun was semiautomatic: the breech remained open after a shot was fired and extracted the shell, but closing the breech had to be done manually.

The Hotchkiss gun was anti-tank, and only that. Its ammunition consisted of two kinds of armour piercing shells: one with a tracer, and one without. A tracer shell (its tip was painted green) made it easier for the gunner to correct his fire, but in some cases, like when fighting from an ambush, it risked revealing the position of the gun. In that case, a tracerless shell could be used (black tip).

The ammunition design was similar to an enlarged anti-tank rifle round: it has no explosive filler and consisted only of steel shot. The mass of the shot was 317 g (320 g for the tracer variant), and the length was 109 mm. The gunpowder in a large 145 mm long casing gave it a muzzle velocity of 920 m/s. According to French data, the cannon could penetrate 40 mm of armour at 30 degrees from 400 meters. The report on Soviet trials of the captured weapon is less optimistic: at the same angle, it gave the gun 36 mm of penetration at 100 meters, 32 at 300, 29 at 500, and 22 at 1000.

The small caliber and semiautomatic breech gave the gun a high rate of fire. French manuals describe it as 20 RPM, but other sources say 15 RPM against moving targets or 25 RPM against stationary ones. A well trained crew could fire 35 times per minute. Of course, in that case, no fire correction was possible.

The gun was equipped with a telescopic 4x sight with a FOV of 11 degrees. The distance markings on the sight went up to 3500 m. A backup iron sight, consisting of a bead and a rear sight, was installed on top of the telescopic sight. It could be adjusted to four positions: 400, 600, 800, and 1000 meters.

Aside from the wavy top, the gun shield had another feature: a large portion of the surface was protected by two additional shields. The mount had deployable trails and two wheels with pneumatic tires. Thanks to the gun's low mass (475 kg), it could easily be moved around the battlefield by its crew of 6. Special straps came with the gun for that purpose. The gun was to be moved by prime movers over long distances, but practice showed that the design was too delicate. The top speed had to be limited to 15 kph off-road and 30 kph on a highway. An attempt to solve this problem resulted in a stop-gap solution: a special trailer with sprung wheels that would carry the gun. This technique, often used with obsolete guns, seemed absurd when applied to a new gun specifically designed to be transported by motor transport. Nevertheless, this method was widespread. Another way to improve mobility was carrying the gun in the truck bed.

A new version of the gun appeared in 1937, Canon 25 mm S.A.-L Mle 1937 (L for leger, light), designed by Puteaux. This gun weighed only 310 kg. Visually, it could be distinguished by a different shape of the shield and flash suppressor. The breech and trigger mechanism were also modified to increase the rate of fire.

The 25 mm guns were present in other French army units, but in lesser amounts. A light mechanized division had 24 of these weapons (12 in the dragoon regiment and divisional anti-tank squadron). A light cavalry division had 28 guns (8 in the dragoon regiment, 4 each in cavalry regiments, and 12 in the anti-tank squadron). A tank division had only a dozen of these guns. To finish off, reconnaissance groups in army corps had four of these guns each.

Fighting in May-June of 1940 showed that the 25 mm gun is an effective anti-tank measure in skilled hands. An iconic example is the battle near the Belgian town of Gembloux on May 14-15th. An anti-tank gun crew commanded by Corporal Louis Brindejon from the 2nd Moroccan Rifles Regiment managed to knock out seven German tanks (three PzII and four PzIII) from the German 4th Tank Division. The French fired from 600 meters, and the gun was so well hidden that the Germans never managed to destroy it. The Germans only managed to cross Brindejon's crossroads when a Fi 156 plane spotted the gun and marked it with a smoke bomb. The gun was disabled as a result of mortar fire, and its crewmen were killed or wounded. Brindejon himself was wounded and captured, survived until liberation, and died in 2010 at the age of 92.

The Germans recognized the effectiveness of the 25 mm gun. Colonel Kune from the 3rd Tank Division wrote:

«The precision of fire from the French 25 mm anti-tank gun is very good. The front armour of the Panzer III is easily penetrated by this excellent French weapon."

However, not all anti-tank units used their cannons as skilfully as Corporal Brindejon. In most cases, the guns were helpless even against relatively «thin-skinned» German tanks of the early war. One participant of the battles of May-June of 1940, commander of a 25 mm gun crew, Corporal Jean Dupont, shared his impressions in an article called Fighting Tanks published in the Field Artillery Journal in April of 1941. Dupont recalled:

«My 25 mm gun crew fired on three tanks. One was stopped, another was delayed for a few minutes, the third remained undamaged despite the fact that we fired many shots from some 50 yards away."

Another issue was that a number of French units did not receive enough 25 mm guns. For example, the 71st Infantry Division went into battle with just 25% of its authorized amount of anti-tank guns.

200 25 mm guns were sent to Britain, receiving Boys anti-tank rifles in return. The British called these guns 25 mm Hotchkiss Mark I. They were used not only by British expeditionary forces in France, but also in Norway. The most known episode in their career happened there. On April 23rd, 1940, a German column consisting of a light PzII tank, an Sd.Kfz. 231 armoured car, and a NbFz three-turreted tank approached the city of Åndalsnes, which was protected by two companies from the King's Own Yorkshire Light Infantry Regiment. The column was followed by infantry (some on trucks, some on foot). As soon as the head of the column entered the Lagen river valley, one of the British 25 mm guns opened fire. The artillerymen managed to disable the NbFz by firing at its suspension, and then knocked out the light tank. The armoured car had no choice but to retreat. The small caliber anti-tank gun managed to disable the heaviest tank Germany had to offer in 1940.

The British were left with very few 25 mm guns after the fall of France, mostly those that were evacuated from Norway. They were used for training purposes until ammunition was expended (production of 25 mm shells was deemed unreasonable due to the low number of guns).

The Wehrmacht indexed the Canon 25 mm S.A. Mle 1934 as Pak 112(f), and the Canon 25 mm S.A.-L Mle 1937 as Pak 113(f). The Germans used them in second and third line units, largely in occupied Western European countries. Some amount of guns made their way to the Italians, where they were indexed Cannone a 25/72 and later used in North Africa.

A small number of Canon 25 mm S.A. Mle 1934 guns were used by the Free French forces in North Africa, including as improvised tank destroyers. The gun was installed on a gun mount in the truck bed of a Dodge WC-51.

The overall impression of the 25 mm anti-tank guns was formed during the fall of France in 1940. Yes, the «Hotchkiss» could not win the war, but these little guns showed themselves well. On one hand, good penetration and rate of fire could destroy the German tanks of the time. On the other hand, the gun had no reserve for boosting its characteristics (and it was already necessary in 1941, as more tanks with anti-shell armour appeared). This partially explains the reluctance of Germany to use these guns. Another drawback, caused by the low caliber, is the absence of a high explosive shell, which could have made it useful for some other task than fighting tanks. The 25 mm guns were no longer anti-tank rifles, but didn't quite make it to the level of «real» cannons. 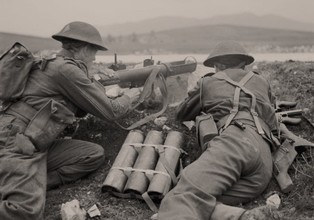 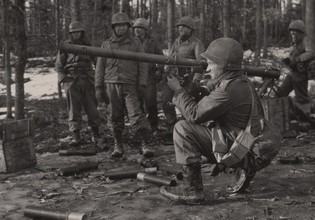 The Father of All RPGs 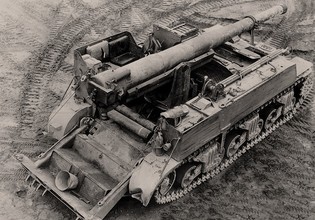 Whose Helmet Was Better?

Highlights for Warspot: Berlin. Even more beautiful than ever!

Museum of the «gods of war»
HI THERE!