The first months of Italy's participation in WWII showed the weakness of its armour. The 47 mm gun on its M13/40 medium tank was insufficient against the thick armour of the British Matilda tank, and the P40 tank with a 75 mm gun was just being designed. The Italians turned to the experience of their main ally to quickly reinforce their armoured forces.

In the end of 1940, Colonel Berlese from the Artillery Inspectorate proposed the creation of an SPG on the M13/40 chassis akin to the German StuG III, with a 75 mm gun in an immobile casemate. The initiative was approved, and Ansaldo (the manufacturer of the M13/40 tank) received the corresponding order. The «Italian StuG» used the Obice 75/18 modelo 34 mountain cannon, which already proved itself during the fighting in Spain and Greece. On January 10th, 1941, Ansaldo presented its customer with a wooden model of the SPG and received an order for 30 units. After trials and minor improvements, the vehicle was adopted into service.

The first model, named emovente da 75/18 su scarfo M13/40 (Semovente M40 da 75/18 as of 1942) used the chassis of the M13/40 tank with the SPA 8T 125 hp diesel. The suspension and lower hull remained unchanged, but the upper hull was radically altered. Instead of a rotating turret, an immobile casemate was installed. The front of the casemate was assembled from two 25 mm thick plates. The sides and rear were 25 mm thick. The roof was 10 mm thick. The armour was held together with bolts and rivets. The M13/40's characteristic side doors were absent. The crew entered the tank through two large rectangular hatches in the roof.

The 75 mm cannon was installed in a ball mount in the front of the casemate, offset to the right. The barrel was covered with an armoured sleeve and equipped with a muzzle brake that also doubled as a flash suppressor. The vertical range of the gun was −12 to +22 degrees, the horizontal range was 20 degrees to the left and 18 degrees to the right. The sights were positioned to the right of the gun and were extended through a hexagonal hatch in the roof during combat. The maximum range of the gun was 8000 meters, and maximum direct fire range was 800-1200 meters.

Initially the SPG was meant to support infantry with indirect fire. Since the vehicle was going to be firing with its hatches open, the designers did not include any provision for ventilation. In practice, the Semovente fought like tanks, without the ability to open their hatches. In this situation, the lack of ventilation was a significant drawback.

The ammunition racks carried 44 rounds (HE, AP, and HEAT), but crews often took additional ammunition, which made the already tight fighting compartment even more cramped.

The vehicle's auxiliary armament consisted of a 6.5 mm Breda mod. 30 machinegun (later 8 mm Breda mod. 38). During travel, the machinegun was carried inside the fighting compartment. If necessary, it could be installed on a pintle mount on top of the roof, which allowed it to double as an AA machinegun.

Each vehicle was equipped with an RF 1 CA radio, installed in the left front part of the fighting compartment. The crew of the SPG consisted of three men: the commander/gunner, loader/radio operator, and driver.

In addition to SPGs, each unit included commander's vehicles. 30 Carro Comando M40 vehicles were built in 1941 (on the M13/40 chassis). These tanks had no cannons, but had three machineguns: a pair of mod. 38s in the front and one mod. 30 on a pintle mount. A large four-piece hatch was installed in the roof. The armour thickness of the Carro Comando M40 was up to 30 mm.

In addition to the RF 1 CA radio, the Carro Comando M40 had an RF 2 CA radio with a range of 20 km. Other special equipment included a direction finder, rangefinder, and binocular telescope. The commander's vehicle was crewed by 3-4 men.

The first self propelled artillery groups formed in the second half of 1941 were designed to reinforce tank division artillery regiments. The 5th and 6th groups disembarked in Tripoli in mid-December, and were included into the 132nd Artillery Regiment of the Ariete division. They arrived at the front lines in January of 1942. The Semovente M40 da 75/18 proved its worth in the first battles it saw. Captain Traniello, sent to Libya to evaluate the new weapon, wrote in his report in March of 1942:

«They showed themselves splendidly, all servicemen without exception evaluate it enthusiastically. They are used as artillery support and as anti-tank weapons. Their armament and low silhouette, which makes them easy to conceal, make them valuable weapons, which was also remarked upon by the enemy in official reports."

Both groups took part in the German-Italian counteroffensive of May-June 1942. The Semovente showed themselves well when storming Bir Hakeim, stubbornly defended by the French Foreign Legion. The French managed to destroy over 30 M14/41 tanks in this battle, but only one Semovente M40 da 75/18. The SPG's low silhouette demonstrated its advantage.

The SPGs appeared in another tank division fighting in Libya, the Littorio division, in August of 1942. The Duca d'Aosta artillery regiment received the 554th and 556th groups.

Even though the Semovente da 75/18 were initially envisioned as mobile cannons, they turned out to be most useful when used directly on the battlefield, similar to German assault guns. When fighting alongside tanks, their chances of survival grew significantly. Despite its low muzzle velocity, the EP HEAT shell fired from the 75 mm howitzer could penetrate 50 mm of armour at 1000 meters. Thanks to this, the Semovente da 75/18 could fight against well armoured Grant and Sherman tanks. One of the officers of the 554th group had this to say about his SPG:

«This was a real fighting machine, which, thanks to its 75 mm howitzer, earned the respect of all enemy armoured vehicles fighting at El Alamein… The high rate of fire, precision, and range caused an expected fear in British tankers."

Of course, the Semovente 75/18 had its drawbacks. The crews complained about the cramped fighting compartment and poor quality of the armour plates. While nothing could be done about the first item, the second could in part be compensated by hanging spare track links and sometimes even sandbags from the armour.

Despite the favourable reviews, the Semovente da 75/18 could not significantly influence the course of fighting in the desert. There were simply too few of them. The Second Battle of El Alamein began on October 23rd, 1942. The 5th group was at the south part of the front lines at this time, the 6th group in the middle, and the 554th and 556th groups in the north. The British could destroy M14/41 tanks with 75 mm cannons on Grant and Sherman tanks without entering the effective range of 47 mm guns. In a few cases, the Semovente da 75/18 indeed acted effectively. For instance, on October 26th, the 554th group destroyed over 20 British tanks. However, the qualitative and quantitative advantages of the enemy, as well as the domination of the skies by British aircraft, left the Italians no chance of success.

On November 4th, 1942, German and Italian units began their retreat to Tunis. Only a handful of Semovente da 75/18 SPGs made it there. The Italians tried to make up their losses by sending two more SPG groups, the 557th and 559th, which were included in the Centauro tank division. The groups were also reorganized: instead of two 4-gun batteries, they now included three 6-gun batteries (18 SPGs and 5 commander's vehicles in total). Despite significant effort, this process was not complete before the defeat of the Italian and German forces in Tunisia in May of 1943. In total, the Italians lost 61 Semovente da 75/18 SPGs in North Africa. 18 more were lost at sea during transport.

The 561st independent Semovente da 75/18 group was based in Sardinia from 1942 onwards. A small amount of these SPGs took part in fighting for Sicily in July of 1942, where 8 Semovente da 75/18 were lost. In 1942, Semovente da 75/18 SPGs began entering tank battalions formed in mainland Italy. These battalions contained two medium tank companies (20 vehicles each) and one SPG company (16 Semovente da 75/18 and 4 commander's vehicles). After the defeat of the Axis powers in North Africa the organization of these battalions changed. Now they contained one tank company and two Semovente companies. The reformation of the defeated tank division, now called Ariete II, also began. It was largely equipped with former cavalry forces. In early September of 1943 it possessed 48 M15/42 tanks and Semovente M42 da 75/18 SPGs, not including SPGs and armoured vehicles of other types.

In the ranks of the Wehrmacht

Individual SPGs were included in the armed forces of the Italian Social Republic after Italy's surrender on September 8th, 1943. For instance, the San-Justo battalion included one Semovente M41 da 75/18, two Semovente M42 da 75/18, and one Carro Comando M41.

The StuG M42 850(i) was chiefly used by infantry (mountain) divisions fighting in Italy. Often they filled up one company in an anti-tank battalion. The TO&E included six Semovente M42 da 75/18, 8 Semovente M42 da 75/34, and 1 command vehicle, but in practice the formation could differ. In February of 1944, these companies were removed from anti-tank battalions and reformed into assault gun battalions.

As of December 31st, 1944, Wehrmacht, SS, and police forces possessed 45 StuG M42 850(i) vehicles. They served in five divisions in Army Group C on the Italian front: 5th mountain jager, 114th jager, as well as the 162th (Turkestan), 356th, and 362nd infantry divisions. A small number of StuG M42 850(i) vehicles were used in the Balkans by the 21st SS Mountain Division and in Hungary by the 12th Police Tank Company.

Even though the Semovente M42 da 75/18 was widely used by the Wehrmacht, the vehicle was not popular. Crews complained about the low reliability, poor ventilation, and low quality of the radios. The short barrelled 75 mm gun was also no longer suitable.

About 50 Semovente M41 and M42 da 75/18 survived the war in reparable condition. After the war, they were included in the Italian land forces with only minor changes (for instance, replacing the radios with British or Canadian models). These SPGs served in infantry battalions as direct support weapons and were only retired in the mid-1950s.

The Semovente da 75/18 is a typical example of a conversion of an obsolete tank into a decent SPG. With the same firepower as an early StuG III, it was still inferior to the German assault gun in a number of tactical-technical characteristics. This was primarily caused by archaic design solutions used in the chassis of the Semovente da 75/18. However, this was only a starting point for Italian tank building. A whole series of SPGs with more powerful armament, long-barrelled 75 and 105 mm howitzers, stemmed from this design. 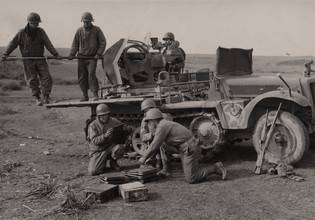 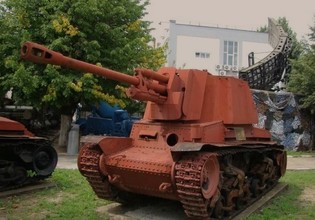 Romanian Czech with a Russian Accent 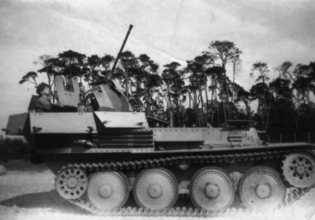 StuG III in the USSR

Anti-Tank Hornet, a.k.a. Rhino
HI THERE!