Having taken part in the 1944 tender for a self-loading carbine, the young Mikhail Kalashnikov suffered defeat. Another design went into production, and Sergeant Kalashnikov received nothing more than experience for his trouble. Who was his competitor in this fight?

Before the start of the Great Patriotic War, the Red Army confidently held its place at the top in terms of equipping its troops with automatic and semiautomatic weapons. In addition to the handheld DP machinegun and DS and Maxim mounted machineguns there were PPD submachineguns and the Tokarev rifle, which came in both semiautomatic and automatic variants.

Unfortunately, the flaws in the design, the overall decrease in sophistication of production as a cost of increasing volume, and the level of training in the rapidly growing Red Army resulted in widespread complaints about the reliability of self-loading rifles. As a result only relatively small production volume of the AVT-40 automatic rifle was retained, mostly in the role of an ersatz LMG.

Nevertheless, the Red Army command did not abandon the idea of widespread issue of semiautomatic weapons. A list of technical tasks for the Main Artillery Directorate of the Red ARmy for 1943 contained the following phrase: «the 7.62 mm self-loading and automatic carbine must be the main weapon of all types of forces in the Red Army».

This demand largely meant the designs of V.F. Tokarev's old time rival in the tenders for semiautomatic rifles: S.G. Simonov. While the contest between the full sized rifles, the AVS-36 and SVT-38/40, is relatively well known, this contest is much rarely explored. Meanwhile, the customer was quite insistent that the rifles should have a shorter counterpart. Proving grounds trials of Simonov and Tokarev carbines took place in 1941, shortly before the start of the war.

As a result of the trials, a decision was made to build a small batch of Simonov carbines. However, this was never done due to the start of the war, evacuation of industry, an a number of other events. As you can see from the table, the Simonov carbine was lighter than Tokarev's design, which was typical for contests between Tokarev and Simonov. Even Tokarev's heavier weapons did not exhibit sufficient reliability and robustness with the powerful rifle cartridge.

Nevertheless, the military did not discard this idea. In addition, the technical requirements stated that «the overall mass with the bayonet and its scabbard must be no more than 3.4 kg», which clearly marks Simonov's mod. 1941 carbine as the trendsetter.

One can assume with some certainty that the army's wishes would have been unfulfilled a second time. However, as the saying goes, «wasn't for bad luck, wouldn't have no luck at all». On one hand, the appearance of a new enemy weapon is hard to interpret as a good thing. On the other hand, it was the capture of the «Mkb auto-carbine» as it was called in Soviet documents that led to the creation of a Soviet intermediate round.

On August 12th, 1943, the Main Artillery Directorate of the Red Army released new tactical-technical requirements #2463 for the development of a «7.62 mm self-loading and automatic carbine for a special round». The document states that the dimensions of the round must match «the blueprints developed by NKV OKB-44 on August 4th, 1943», only 8 days before the requirements were issued. The mass of the new carbine with a bayonet was limited to 3.2 kg.

One of the most initially promising variants was designed by Kalashnikov's colleague at the proving grounds, Engineer-Colonel Nikolai Vasilyevich Rukavishnikov. Here is what Kalashnikov recalled about him:

''The gun designers at the proving grounds had their own unique school of thought, their own traditions, a high degree of professionalism original engineering thought, a sharpened design culture.

I would say that N.V. Rukavishnikov was the first among them. He was composed in his manners and didn't speak much. He and, perhaps, V.F. Kuzmischev were true veterans for us young designers. Nikolai Vasilyevich prepared his blueprints like works of art. His lines were clean, his calculations precise, his arguments indisputable.

He typically received prizes in his contests. For instance, during the design of a rifle for the model 1943 round, N.V. Rukavishnikov's project received the first place. Mine came second, and the third place was taken by K.A. Baryshev, a young designer who came to the proving ground not long before that to take the post of an engineer-tester after the completion of the artillery academy. He was included in the design bureau not long after."

This excerpt from his memoirs mentions a rifle contest, but during the carbine contest it was Rukavishnikov, Kalashnikov, and Petrov that became rivals.

The first variants of the SKR were presented in 1944. Two stages of trials showed that the design chosen was interesting, but unrefined. The carbine did not pass reliability trials of the semiautomatic mechanism and other components. Trials of the improved SKR took place between January 11th and March 7th, 1945. Such a long period (usually trials only took a few days) might be explained by the deficit of mod. 1943 rounds. Four different batches of the intermediate round are referred to in the trials documents. However, the pauses in the log of the trials are labelled «repairs of the carbine».

Unfortunately, a full description of Rukavishnikov's carbine is missing from the archive folder. There is only a list of improvements, among which two are interesting: «a cover is introduced into the receiver to protect the breech from dust» and «the protrusion of the automatic safety was increased and a storage compartment was introduced into the stock».

Trials of the SKR showed that at 800 meters it was nearly identical to the SKS #14 and less than that of the SKS #13. However, the trials document noted that weather conditions could have affected its performance (-20-25 colds, haze).

The practical rate of fire trials were ahead of everyone else. The SKR could make 40 shots per minute, while the Simonov's rifle could fire 30-35, and the SKR scored more hits. The testers credited Rukavishnikov's en-bloc clip design for this.

Alas, the SKR failed the reliability trials that followed. However, that was not yet a death sentence. The high rate of fire and the fact that none of the defects were difficult to correct meant that the development of the SKR was allowed to proceed.

An old-timer is born

Meanwhile, two more prototypes from Simonov arrived at the proving grounds. Carbines #14 and #15 had a non-detachable folding bayonet with different methods of attachment. On SKS #14 the bayonet was mounted with a special cover, and SKS #15 had a special clip. The report mentioned that the SKS #15 was smaller, but was less reliable and more complicated. Otherwise, the carbines were similar to those tested prior. SKS #14 was close to SKS #13 tested in December, and the #15 resembled #5 and #6.

Simonov's main feature was the design of his semiautomatic system. The carbine had a short-stroke system, but the gas piston interacted with the receiver using a sprung plunger rather than directly.

Simonov's rival wasn't far away. F.V. Tokarev designed his own carbine for the intermediate cartridge. There were also several variants designed at Degryaryev's bureau KB-2. The KB-P-290 designed by Dolgushev and Ivanov was similar to other proposed variants, having a fixed 10 round magazine. The KB-P-330 (Garanin, Bugrov, Degtyaryev) had a bipod and removable 20 or 25 round magazines.

As we know, Simonov won out in the end. There is logic in this. Sergei Gavrilovich was working on this idea for more than one year, and having a polished 1941 design was a big step up from his competitors. The complete history of the creation and use of this carbine deserves a separate article, or even a book, especially since there is no shortage of white spots in it. However, as further events showed, even significant design experience and a library of well tested solutions is not always enough. 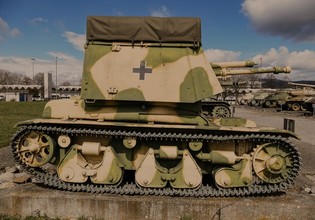 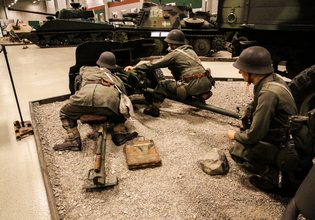 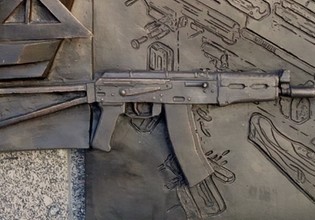 Personal Artillery for a Downed Pilot
HI THERE!