The British 25-pounder Mk.II gun-howitzer proved itself a universal weapon which met the requirements of the North African and European theatres of war. However, a more compact weapon was needed for fighting in Pacific islands, and for transport through narrow mountain passes and jungle trails.

The Australians were the first to realize this need in the heavy fighting in the jungle and mountains of New Guinea. The heaviest weapon used in this scenario was the 81 mm mortar. A small amount of 3.7' (94 mm) mountain howitzers and 75 mm mountain howitzers given by the Americans did not improve the situation. At the same time, the Japanese army was using mountain guns that could be disassembled and transported by pack animals or even human carriers.

The main weapon of Australian field artillery was the 25-pounder Mk.II, produced from May of 1941 to the end of 1943 at the state factory in Melbourne (1527 units made). The Australian Director of Artillery, Brigadier John O'Brien, proposed the creation of a maximally lightened 25-pounder gun that could be disassembled for transport by air. The Charles Ruwolt Pty Ltd company was tasked with this project.

The designers completed their task quickly. Design started in September of 1942, and proving grounds trials of the prototype were underway on December 10th. In early next year, the prototype was tested in combat conditions in New Guinea (with the 2nd battery of the 1st Field Artillery Regiment). In 1943 the gun was accepted into service under the name Ordnance QF 25-pdr Short (Aust) Mk.I on Carriage Light (Aust) Mk.I.

The barrel was shortened during the redesign, and new recoil mechanisms (created during the design of the Sentinel tank) were installed. Smaller diameter pneumatic wheels were used, as well as a simplified mount without the characteristic bend, but with a spade and a small wheel underneath the trail to make the gun easier to push for the crew. To take the load off the wheels, two trails were added underneath the axle, which could be deployed before firing. The prototype was equipped with a gun shield, but in mass production the shield and the rotation platform were deleted. As a result, the gun shed over 300 kg of weight and could easily be towed with a Jeep. The gun could also be disassembled into 13-14 components to be transported by mules or air dropped.

Trials showed that the flame from the shortened barrel could damage the recoil mechanisms, and the gun was equipped with a conical flash suppressor. The cost of the shorter barrel was the decrease in range from 12,250 m to 9300 m, but this was deemed acceptable in the jungle. The maxium range with a supercharged round was 10,500 m, but due to the danger this posed to the weapon firing them was only allowed in emergencies.

The sights of the gun were the same as on the basic model: panoramic No.7A, No.7C, or No.9 sights, as well as a No.29 or No.41 telescopic sight for firing directly.

The shortened 25-pounder could fire the same ammunition that the standard gun could. The main round was the Mk.ID HE, filled with amatol (rarer TNT or RDX) with a contact fuse. The Mk.ID BE smoke shell with a ranged fuse also found its use. Theoretically, the Ordnance QF 25-pdr Short (Aust) Mk.I also could use an AP-T Mk.IT shell, but no information is available regarding the use of these in combat. The Mk.IIDT HE-T, ranging smoke shells (with yellow, red, green, or blue smoke), and illumination shells equipped with parachutes were also rarely used. Finally, some authors mention the Australians creating «paper shells»: hollow shells filled with propaganda leaflets. One can assume that these shells were made out of smoke shells, like analogous ammunition used in North Africa.

Like the standard 25-pounder gun, the 25-pounder Short had a crew of six.

Mass production began in early 1943. An order for 112 units was followed by an order for 100 more. Guns from the second series were equipped with the Carriage Light (Aust) Mk.II that had larger wheels. 212 mass produced guns were made in 1943-1944.

The introduction of the 25-pounders in August of 1943 was connected with the change in infantry divisions to «jungle» formations. According to the new TO&E, the division was equipped with one 3-battery artillery regiment, in which two batteries were armed with regular 25-pounders and one with the short versions. Later, a part of the «jungle» divisions received two more artillery regiments. The organization of short gun batteries differed from regular ones significantly. A battery consisted of the HQ platoon (4 Jeeps and one light trailer) and two fire platoons: four guns, seven Jeeps, and one D6 tractor with a 1 ton trailer apiece. 24 rounds were carried in each Jeep and 88 more in the trailer.

The first units to receive the lightened 25-pounders were the 2nd battery of the 4th Field Artillery Regiment and the 2nd battery of the 12th, attached to the 7th and 9th Australian Infantry Divisions respectively. The «Baby», which is how the Australians nicknamed their shortened guns, made their debut during the landing in Nadzab (New Guinea) on September 5th, 1943. On that day, 2 guns and 32 artillerymen of the 4th Field Artillery Regiment were dropped by air alongside the American 503rd Airborne Regiment. One of the guns was assembled quickly and opened fire an hour after landing, but the other could only be brought into action two days later. Some of the components were difficult to find in the tall grass.

The impressions from using the shortened 25-pounder were mixed. On one hand, the mobility of the lighter gun in the jungle surpassed that of the standard gun-howitzer. On the other hand, the gunners cursed the poor stability of the guns while firing. A consequence of the poor stability was the low rate of fire (3-4 RPM), since firing knocked off the aim. The crewmen sometimes stood on the trail to prevent the gun from shifting after firing, but this could injure them due to the powerful recoil.

The commander of artillery in New Guinea, Brigadier Lewis Barker, even insisted that these guns be replaced with American 75 mm mountain howitzers, but O'Brian managed to protect his brainchild. As a result, the shortened 25-pounders kept fighting in New Guinea until the end of the war. In some cases (for instance, in the artillery regiments of the 9th Infantry Division) they were kept above TO&E: all batteries of the regiment were equipped with standard 25-pounders, but the shortened versions were kept in warehouses and issued when a battery had to operate in difficult terrain. In December of 1945, the QF 25-pdr Short (Aust) Mk.I was deemed obsolete. A year later, the Australians wrote off remaining guns, fully moving to standard 25-pounders.

Interestingly enough, post-war evaluations of the QF 25-pdr Short (Aust) Mk.I are generally positive. Military historian Major General (ret.) Steve Gower calls the gun «…undoubtedly one of the most exceptional Australian weapon developed in the WWII period», considering it an excellent example of adaptation of a foreign weapon to local conditions. According to British historian Chris Henry, the short 25-pounder «served well and turned out to be reliable enough for use (and survival) in the jungle, although its design demanded further improvements.»

Even the British became interested in the Australian experience. During fighting in Italy, units often felt the lack of mountain artillery, forcing the rearmament of two regiments with American 75 mm mountain howitzers. However, the development of the British variant of the lightened 25-pounder gun, indexed the Mk.IV, dragged on. The military demanded that changes should be made to permit using the supercharged round. As a result, two prototypes were ready only in May of 1945. After the VE Day work on this variant ended. 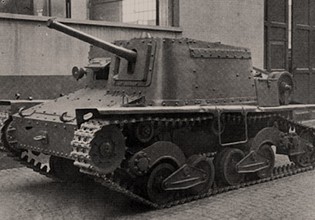 Highlights for Warspot: from the best angle

Museum of the Bridge Too Far