The Swedish post-war Strv 74 medium tank is interesting due to the fact that medium tanks died out as a class after the end of WWII. They evolved into main battle tanks, built by all leading tank building nations at the time. The Strv 74 was designed and accepted into service at the same time as the Soviet T-55, American M60, and a little earlier than the German Leopard. The Strv 74 was also the last Swedish tank with a classical layout, as it was replaced by the exotic turretless Strv 103. How was the last European medium tanks created and what was it like?

Few small European countries were as lucky as Sweden in the 20th century. It and its Scandinavian neighbours avoided participation in the First World War. During the Second World War, while even that quiet corner of Europe was drawn into the fighting, Sweden managed to retain its neutrality despite war coming at it from all sides. Denmark was occupied, Norway became a battlefield for British, French, and German forces, the Soviet Navy and the Kriegsmarine clashed in the Baltic, but Sweden lived in peace.

Of course, it's hard to explain everything with pure luck. Swedish neutrality was held up in part by careful work of diplomats. The aspect of sitting out in a war against fascism is beyond the scope of this article, but the Swedes still knew of the rule laconically described by Napoleon Bonaparte: «A nation which won't feed its army will soon feed someone else's."

Sweden is an average country in size, but low in population. The wealthy and prosperous Sweden we know in the 21st century was not exceptional in the middle of the 20th. Nevertheless, despite a shortage of human and material resources, Sweden paid close attention to military matters ever since announcing their neutrality in 1814. As a result, the country with only 10 million people (about the same as Belarus, Portugal, Greece, or Serbia) produced and keeps producing a wide variety of infantry weapons, armour, artillery, and aircraft. From 1945 to the end of the 1950s, Sweden was developing nuclear weapons and carriers for them: bombers and winged rockets.

The nature of neutrality caused a significant amount of Swedish weapons to be developed witout looking at foreign developments. In some cases, weapons developed by Swedish engineers or foreigners working in Sweden became objects of imitation for foreign designers. One example of this is the Lansdverk L-60 tank, which served as the base model for the Stridsvagn m/38 tank and the Hungarian Toldi light tank. The L-60's torsion bar suspension used in 1934 became the norm in worldwide tank building much later. The first Soviet mass production tank with torsion bars was the T-40, which was created in 1939.

The same L-60 with its revolutionary suspension could be considered a precursor of the last Swedish turreted tank, the Stridsvagn 74.

Towards the end of the 1930s, the Swedes developed the medium Lago tank for the Hungarian army, which had a certain similarity to the L-60 and its «offspring». The 15 ton tank armed with a 47 mm gun was finished and shown to the Hungarians, but they chose the simpler Czechoslovakian T-22 tank as the basis for their Turan. However, the work on the tank was not wasted. In the early 1940s, the Swedish army experienced a need for medium tanks. The Lago served as a basis for the Strv m/42 tank with a mass of 22.5 tons, a short barreled 75 mm Bofors gun and four 8 mm machineguns.

282 of these tanks in varying modifications, mostly differing in engine and transmission, were built between April of 1943 and January of 1945. The TM, TH, and TV variants used a pair of Scania-Vabis L-603 engines with a power of 160 hp each. The Strv m/42 EH used one 380 hp Volvo A8B engine. The crew in each type of tank consisted of four men. The TM variant also used an electric transmission, but it worked poorly, and finally all tanks of this series were converted to TH or TV variants with a hydraulic transmission.

Towards the end of the war, it became clear that the Strv m/42 was inferior to medium tanks of both the Axis and the Allies. The Cold War left no time for engineers to rest, as even local conflicts saw the emergence of main battle tanks with the mobility of medium tanks but the firepower and armour of heavy tanks. The Swedish army, trying to keep up with the arms race, looked into purchasing the relatively inexpensive French AMX 13 tank. In the early 1950s, a deal was struck to buy 300-400 tanks of this type.

After a period of heated debates, the Swedish army bought 80 British Centurion Mk.3 tanks in December of 1952, armed with 83.4 mm guns. Later, they were joined by 270 Centurion Mk.10 tanks with 105 mm guns. The British tank was much better protected and could withstand the aftereffects of a nuclear weapon. It's worth noting that the close contact with the AMX 13 had its effect on Swedish engineers. After experiments with a fixed gun and an autoloader (for example, an attempt was made to install an AMX 13 turret on the Strv m/42), the Swedes achieved a breakthrough in that direction and created a unique «oscillating tank» and a rapid fire Artillerikanonvagn 151 self propelled howitzer, but that's a whole different story.

The Centurion was a good tank, but an expensive one for the small country. After a cancellation of the order on AMX 13s, the spot of the mass production tank remained vacant. The Strv m/42 with their obsolete guns but viable chassis came in handy.

Of course, cheap is very rarely good, which is highlighted by the effective range of the Strv 74 and Strv 81 (the Swedish name for the Centurion Mk.3) against their likely opponents: the T-54 and IS-3.

Production of the new Swedish tanks mostly consisted of building new turrets (113 built by Lansverk and 112 by Hagglund & Soner) and installing them on the existing Strv m/42 chassis. The massive turret had very light armour and protected from maybe only high caliber machineguns. The conclusions of the report of the Royal Military Academy on trials of the Strv 74 turret carried out in August of 1960 contain little consolation for Swedish tankers. Shells from a 20 mm gun could penetrate the turret from less than 300 meters (aside from the mantlet), and up to 640 meters from some angles. The pre-war 37 mm m/34 anti-tank gun could penetrate the turret from any side from 750 meters, aside from the gun mantlet. The gun of the Strv 74 itself could penetrate even the «impenetrable» mantlet from 1400 meters. It was likely that it would penetrate from an even larger distance, but this was not attempted.

All m/42 TH and TV tanks were converted to Strv 74s between 1957 and 1960. The 57 remaining Strv m/42 EH tanks weren't scrapped, but were modernized in small ways, mostly touching the communications equipment and position of the machineguns, and accepted into service as the Ikv 73. The Infanterikanonvagn is a specific kind of fighting vehicle that translates as «infantry gun vehicle». Its job is infantry fire support, and it's used by infantry brigades. Classifications of other countries place these tanks into the tank destroyer or light tank categories. The peak of this class was the 16 ton Ikv 91 with a 90 mm gun, which was removed from service in 2003.

Even the old Strv m/42 turrets weren't thrown away after modernization. The resourceful Swedes installed them as fortifications (Värntorn, defensive turret) in key parts of the shores, in ports, and in airports.

225 tanks were converted into the Strv 74. They were sent to tank brigades, which had an authorized strength of 48 such vehicles. Strv 103s started being shipped out to the military in 1967, and the old Strv 74s were reassigned to infantry assault companies, 11 tanks per company.

The Strv 74 weighed 26 tons. The crew consisted of 4 men, and the roomy turret and driving compartment made their positions fairly comfortable. Aside from the 75 mm gun, the tank also had two Ksp m/39 Strv 8 mm machineguns. A pair of two six-cylinder Scania-Vabis 607 gasoline engines with a total power of 340 hp allowed the tank to accelerate to 45 kph on roads. There were two types of the tank: the Strv 74 H with a hydraulic transmission (155 vehicles) and the Strv 74 V with a mechanical transmission (70 vehicles).

The last Swedish turreted tank was used by the army until 1984. After that, according to good old tradition, Strv 74 turrets were turned into Värntorn along the coastline. In 1999, their service ended even in this capacity. After the end of the Cold War, they were scrapped.

Familiarize yourself with the Strv 74 with this photo set. 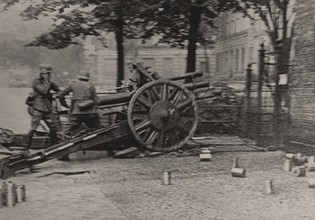 Polish Postmen Against SS and SA 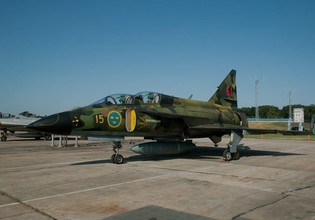 A Spear, a Robot, a Lightning Strike and a Sea Serpent 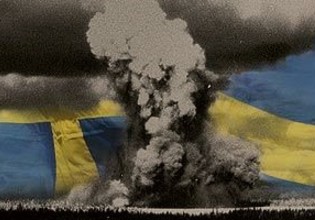 Pz.Sfl.IVb: Halfway to the Hummel

First Try at a Medium Tank