At an unusual parade in Paris on July 14th, 1951, the French military showed off all their newest vehicles that was adopted by the army or still undergoing trials. EBR armoured cars and ARL 44 tanks drove along the Champs-Élysées. The parade was concluded with the passage of two Foch tank destroyers and two AMX 50 tanks. Only a chosen few knew that these tanks will not enter mass production and that superior tanks are already on the drawing board.

In 1944, the American army adopted the 120 mm M1 AA gun. The gun had excellent characteristics, including high penetration. It is not surprising that the Bureau of Ordnance started development of a tank gun on its basis in January of 194. The gun was indexed T53. In May of 1945, the Bureau recommended to install two of these guns in T30 tanks, putting a start to the T34.

In late 1946, the AMX company proposed a self propelled gun design on the AMX M4 chassis. The vehicle was lengthened to 9 road wheels per side. Its mass would be 58.5 tons, and it would be equipped with a 120 mm gun and a MAC Mle. 1931 machinegun. Even though this design was not produced, further development of this project resulted in the Foch SPG armed with that same gun. This project was the first where French engineers used a 120 mm tank gun, the French version of the T53. The French mostly borrowed the ballistics of the gun, radically changing both the barrel and other components.

AMX started working on an M4 tank with an altered front and a lightened turret in spring of 1950. During planning, variants ranging from 50.5 to 70 tons were explored. Such a vehicle was rejected, but a new proposal was made in September of 1950. The only unchanged part was the turret, in which the engineers wanted to put a 120 mm gun.

It is noticeable from the first sketches that this gun differed from the SPG version. Unlike the SPG's composite barrel, the tank gun had a monobloc barrel, same as the T53. Although, it was not introduced immediately, and early plans still had a composite barrel. The new turret was going to be installed on the stock AMX M4 hull, but it was discovered that the lighter turret would fit more comfortably on a larger turret platform.

The lightened turret project was abandoned, but not for long. It came back in June of 1951. It's worth noting that the second prototype of the AMX 50 was undergoing trials at this point with a widened 3400 mm hull. Weighing the pros and cons, the lightened turret was finally discarded, but not the idea of using a 120 mm gun. Work began on creating a new larger oscillating turret for the gun. The turret was developed by FAMH.

The new turret project, titled T.O.A. 120, was presented by FAMH a year later, in June of 1952. The turret from the second AMX 50 prototype was used as a base, and enlarged. The height of the new turret was 1685 mm. To compare, the height of the original turret was 1260 mm. The turret bustle became 600 mm longer, and the width reached 2840 mm (2484 mm in the original). The diameter of the turret ring was 2320 mm, and the mass of the new turret was 20,260 kg. A simple calculation showed that even if existing chassis characteristics were preserved, the mass of the tank would be 58-59 tons. The height was also impressive: at 3.5 meters, the tank was taller than the Maus. Nevertheless, the tank was still called a medium!

The first prototype of an AMX 50 with a 120 mm gun was built in 1953. The hull was the same as the hull of the 100 mm version, as were the rest of the components. The mass of the tank was 59.2 tons. The ammunition rack contained 50 shells, 18 of which were inside the turret. The revolver type autoloader held 6 shots.

In the Search of Perfection

Initial trials showed that the increase in mass had its consequences. Problems with the engine started, as it was not meant for this kind of load. Even worse, the autoloader mechanism showed problems. The tank's crew was still 5 men, even though the assistant loader was effectively ballast.

In December of 1953, specifications for a lowered tank (AMX 50 Surbaissé) with an altered turret indexed T.O.B. 120 were published. The overall mass of the vehicle was supposed to decrease to 57,800 kg, and the height to 3350 mm. In addition, the overloaded Maybach 295 engine would be decreased in power, first to 900, then to 850 hp. Even with this power, the tank's top speed would remain at 50 kph. In addition, the armour layout was reviewed. The rolled 90 mm front plate was replaced with a cast piece. The sides were about 60 mm thick, but due to heavy sloping, were equivalent to 200 mm of armour. At the same time, the assistant driver position was eliminated.

The first blueprint of a lowered hull is dated September 1953, where the hull is 1190 mm tall. It uses the designation «Char 50t B», which is where the index AMX 50B comes from. The hull changed drastically, shedding nearly all resemblance of the AMX 45. Only the suspension reminded of the tank's German past. The height of the engine compartment was reduced by redesigning the cooling system. The fans were removed from the compartment roof and air vents were moved to the rear.

Despite active work on a lowered hull, a completely different tank entered trials in 1955. This tank, known as AMX 50 Surblindé (AMX 50 Uparmoured), was even heavier than the initial prototype of the AMX 50 with a 120 mm gun. French engineers looked up old projects from the early 1950s and took the hull almost entirely from there. This tank also had no room for an assistant driver.

The piked nose had a certain resemblance to the IS-3 tank. The lowered hull was nowhere to be seen: the tank's height went up by another 10 cm. Instead of the T.O.B. 120, this tank used the same old T.O.A. 120. Trials showed that the problems seen in the first AMX 50 with a 120 mm gun were even worse here. It's not surprising that work on this prototype quickly ended.

At the same time, FAMH was working on the T.C.B. 120 turret. Sadly, there are few details on this turret, and only a sketch remains to this day. It looks like it was developed as an alternative to the AMX 50B. Unlike the T.O.A. 120, there was no automatic loader. On the other hand, it had a rangefinder and, most likely, thicker armour. It was supposed to be used with the lowered hull.

Bad luck with AMX 50 Surblindé froze the 50 ton tank project for a long time. It was only revisited closer to 1957. The mass of the vehicle was set at 57.8 tons. According to preliminary characteristics, the tank would one again have a 1000 hp engine, with an expected top speed of 55 kph on paved roads or 45 kph on dirt roads. Considering that the 55 ton AMX 50 did not manage a speed of over 51 kph, it's a wonder how these characteristics were supposed to be reached.

The gun was also slightly altered, and now it used the same ammunition as the T112 gun, installed on the American M103 tank. The T.O.B. 120 turret was a little longer due to the enlarged bustle, and the height grew to 1705 mm. The ammunition capacity increased to 46 shots (27 in the turret), and new AAT 52 machineguns replaced the old MAC Mle. 1931. The amount of machineguns was reduced to two: coaxial and AA. The most important change was to the classification of the tank. 10 years later, the military finally decided that a 50 ton vehicle is not a medium tank. It received the index Char Lourd 50 tonnes «Surbaissé» (heavy tank, 50 tons, lowered).

The AMX 50 Surbaissé was finally built in 1958, almost 5 years after its blueprints were finished. Initial trials showed that the military rushed with its characteristics. The tank could not accelerate past 51 kph. The engine started showing problems again, and it was reduced in power to 850 hp. THe suspension, not designed for this mass, was also full of problems.

The last documents on the AMX 50 Surbaissé are dated January 7th, 1959. A short while later, the 13.5 year long tank program was closed. There were many reasons for this, all of them reasonable. The tanks armour was no longer adequate. The weapons of Soviet heavy tanks, the main enemy of the AMX 50, could deal with the armour of the tank since the very start of the project. The appearance of the British 105 mm L7 gun in the early 1950s made the situation worse. In addition, since 1955, France was participating in a 30 ton class tank project jointly with Germany, the Europanzer. This design seemed a lot more promising than its competitor that weighed almost twice as much.

Perhaps the most important reason for closure of the AMX 50 program was the ascension of Charles De Gaulle to the post of Prime Minister on June 1st, 1958. He became a real assassin of military projects without a future. His first victim was the Batignolles-Chatillon 25t, which clearly had no advantages over the Europanzer. The second in line for the chopping block was the AMX 50. The joint Franco-German project dragged on, but eventually resulted in the AMX 30. This vehicle became the main French battle tank, remaining in service to this day.

As for the AMX 50, the AMX 50 Surbaissé can be seen today at the Saumur tank museum. It stands next to the ARL 44 in the hall dedicated to French post-war designs, serving as a reminder of what happens when you don't stop in time. In 1946, French generals could have had one of the most impressive immediate post-war medium tanks, but their endlessly growing appetites resulted in a monster that had no room in the rapidly evolving environment of the 1950s. 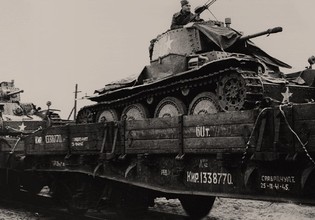 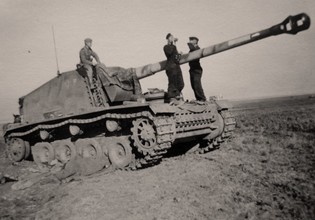 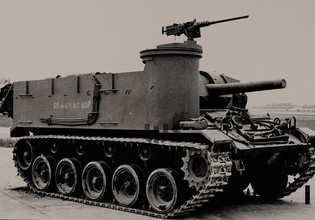 HMC M37: a Fast Howitzer on a Light Chassis
Share