Thanks to the Lothar-Günther Buchheim’s novel and the Wolfgang Petersen’s self-titled movie “Das Boot”, which were released in 70-80s of the previous century, the interest to German U-boat operations during World War II has dramatically increased. History enthusiasts started asking questions not only about warfare but also about daily life of U-boat men. Of particular interest were topics on food for crewmen, how it was chosen and stored during long patrols, including products a man cannot survive without. Why U-boat crewmen preferred fresh bread, which went moldy pretty fast due to the damp environment, over hardtack that lasted longer?

The Germans were supplying their U-boats with food exceptionally. Product deliveries from France, Denmark, Portugal, Spain, Italy, etc. to U-boat bases started after the hegemony of Germany was established in Europe. Sailors brought with them fresh and boiled meat, fresh vegetables and fruits, cheese, honey, chocolate, smoked sausages, juices, various canned goods and many other. Only one problem – while on the move bad conditioning and high humidity caused fresh products to get moldy. Eventually crewmen had to go on a canned-vitamin diet – the longer the journey the worse was their food.

U-boats were equipped with provision lockers and refrigerators, however technical specifications were created by Kriegsmarine high command during peace time and it was hard to imagine that Type VII submarines are going to operate off the coasts of the USA, Africa and Caribbean, and large Type IX submarines in the Indian Ocean.

During the war sailors had to improvise, adapt to a situation that required increased autonomy. Submarines were receiving provisions from supply ships, picked up supplies in Spanish ports, then there were “milk cows” (Milchkuh/Milchkühe) – Type XIV support U-boats. However, this did not solve the problem. Supplies were spoiling, smelling – to summarize, gourmets with refined taste were not welcome on Type VII and Type IX U-boats.

How the food supply for the crewmen was calculated

This matter was mostly the responsibility of two crew members – Third Watch Officer (or Navigation Officer) and cook, who were in charge of food supplies. A cook or as crewmen called him 'Smutje' (smutje, smut – roughly translated as «sloven», «dirty»), was a man of special status on a submarine. Should have been not only good at cooking but also to be a gifted restaurateur in order to form a menu.

Navigation Officer was calculating the amount and assortment of food received from warehouse depending on how long a journey would take. After that supplies were loaded onto U-boat under supervision of Navigation Officer and senior machinist and stored in most suitable places. The storage of food should have always met the following three basic rules:

Logically, supplies main storage sites were the bow section, aft part and electric motor room. It was impossible to store anything in diesel engine room because supplies quickly started to smell with pervasive diesel odor. Control room should not be cluttered up since U-boat was operated from there, not much of supplies would fit into crew quarters and the passages should have remained clear.

This is how the Type IXC U-boat’s provision supply looked like calculated for the crew of 55 men for a 12-week period. The submarine was loaded with food and beverages weighing more than 12 tons (12 583 kg), including:

Bread is a necessary food on a submarine, however there was always a problem with storing it. Hardtack compared to fresh bread lasts longer but tastes worse and causes digestion disorders. Surely it could be the solution, but Germans have approached this issue from another angle. They ate fresh bread for which they came up with an interesting name “rabbit”. This is what Reinhard Suhren – famous German U-boat ace wrote about it:

“The biggest problem was the bread. We placed it into a hammock so that plenty of air could get to it, but after a while it used to go stale and [the loaves] looked like rabbits because they were covered in mildew. We just removed as much of it as possible and then ate it”.

There was canned bread in addition to fresh, but what about its quality? An unusual witness answered this question. On November 21, 1942 the U 163 submarine sank the “Empire Starling” – British trade vessel and Eric Monckton – its captain was captured as a prisoner. Later Monckton has left curious memories about his stay aboard the U 163, including the food:

“7am breakfast consisted of milk soup, coffee and biscuits or jam sandwiches. Bread was stored inside of hermetically sealed cylinders about 10cm in diameter and 23cm long. This way it was very well preserved although a little dry”.

To summarize, supply system was rather logical. Bread stock was divided into two almost identical piles – fresh bread in one and canned bread in another. Of course fresh bread did not last for long and it was sought to be eaten first. After all fresh bread was eaten or spoiled, there still was a large enough supply of canned bread left, consumption of which was strictly limited.

If you look at U 93 menu for the crew which was created by the cook on fourth week of patrol (January 12-18, 1942), you will see that bread was served twice a day (it is not clear why there was no dinner on Thursday – is it missing by negligence or it was an official “fast day”):

Notably, U-boats could receive freshly baked bread right in the open sea, on a rendezvous with “milk cows”. Type XIV support U-boats were equipped with electric bakery. Thus, the following was reported about the first mission of the transport U 459 – head Type XIV submarine:

“About 80 of 1kg bread loaves could be baked after approximately 10 hours of work. About 800 loaves were baked overnight and transferred to submarines to the joy of their crews. Moreover about 250 loaves were baked for the own needs. Baked rye bread is really filling, wonderfully tasty and stays well preserved long enough…”

In addition to the above I should add that every combat submarine was equipped with its own 300kg dough reserve and hard taсk biscuits, which Admiral Dönitz staff did not need, obviously. 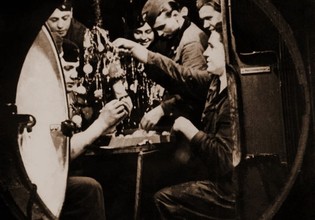 Naval Aviation: how to set a plane on floats
HI THERE!