The need to hide artillery appeared long ago, but the military took development of camouflage paint schemes seriously only on the cusp of the 19th and 20th centuries. Progress in observation methods and increased movement of all sorts of forces played an important role. Widespread use of firearms and the introduction of aircraft dispelled the romantic notion of tight formations and colourful uniforms. There was a sudden need to quickly hide equipment, especially large equipment such as tanks, guns, and automobiles, but not at a cost to mobility. How did the Red Army deal with camouflage during the Great Patriotic War?

For a long time, typical camouflage was applied in a single tone of various shades of khaki, olive drab, and other varieties of green, but this was ineffective. WWI gave a significant push to the development of camouflage patterns. Manuals for painting camouflage were developed during the interbellum period based on wartime experience and then improved based on experience in WWII. This issue did not go unnoticed in the USSR.

The Main Artillery Directorate of the Red Army developed various instruction manuals, guides, and memos regarding the painting of camouflage patterns on equipment directly by army units, at military bases, at repair yards, or at factories. These documents described the process of painting summer and winter camouflage on cannons and tractors.

This type of camouflage was developed for spotted backgrounds (forest, shrubs, fields with exposed earth, etc). Three colours were used. Green 4BO paint, matching most types of vegetation, was the dominant colour. It covered 45-55% of the surface of the object. Yellowish-earth 7K matched the colour of freshly ploughed soil, dirt roads, etc. It covered 15-30% of the object. Finally, dark brown 6K matched the colour of soil in shade, tree bark, etc. It also covered 15-30% of the surface.

Spots in camouflage patterns had to match the shape of naturally occurring backgrounds, and have a distinctive uneven outline. Large characteristic parts (gun shields, barrels, wheels) were covered in spots of various colours that broke the silhouette apart. Protruding parts were coloured in dark paint.

An interesting detail is the requirement for edges of the spots. Camouflage paint performs differently at different ranges. To put it simply, camouflage makes no sense at very long or very short distances. In the first case all colours blend into one, in the second all spots are noticeable and don't blend into their background. Camouflage is most effective at medium distances, and each distance has its own optimal size for spots. At 300-600 meters, the size of spots should be 8-40 cm in width and up to 80 cm in length. At 500-1000 meters the dimensions of the spots increase to 15-80 cm and 200 cm respectively.

Long range artillery has a greater range from which it can be spotted than battalion level artillery. The spots on these guns should be larger, and their borders more defined. For smaller calibers it is more important to hide at close range. Blurred edges make camouflage more effective at close ranges, but makes it less effective at long ranges. Because of this, guns 20-76 mm in caliber were painted with blurred spots, and guns with higher calibers were painted with hard edges.

There were other nuances. For instance, factories and military bases painted new or refurbished vehicles with grated pigments of three different colours (4BO, 6K, and 7K) according to the aforementioned requirements. The positioning and pattern of spots was dictated by diagrams, although it was recommended to cycle through 2-3 variants of positions to increase the variety. Before painting, a primer coat of iron oxide was applied (40% dried or grated iron oxide, 55% oil varnish, 5% dessicant #64). Primer could be applied either by airbrush or by paintbrushes. If possible, it was recommended to dry the paint for two hours at a temperature of 80 degrees.

The first layer of paint (brushed) was composed of:

When applying the paint via airbrush it was thinned with white-spirit until it reached the necessary consistency.

Notably, paint was only applied to areas where it was marked. Spots were not painted over one another. The second layer of all colours was diluted with oil varnish and gasoline or white-spirit to thinner consistency than the base layer. The viscosity was picked experimentally.

The painting process at repair bases was similar to the factory process, but took into account the possible lack of materials or instruments. If the vehicle was already painted in 4BO, the coloured spots were painted on top, leaving the top layer intact. Chalk was recommended as a marking between colours.

The paint was distributed in the form of a thick paste with the recommendation to dilute it with equal parts oil varnish and gasoline in the amount of 25-40% of the weight of the paste. It was acceptable to thin the paint with gasoline or kerosene only, but one can assume that the paint applied in this way would not hold very well. The desired consistency of the paint was thin enough to allow it to be painted with a brush. One layer of paint was applied, using about 100 grams of paint per square meter. If blurred edges were desired, pure gasoline or kerosene was applied to the edges of the spots while they were still wet along a 1.5-3 cm wide strip.

Many techniques used for winter camouflage of vehicles discussed previously were also applied to artillery, such as the principles of mixing certain colours, applying spots, etc. However, artillery camouflage had its nuances. The difference in the technical process and simplification of ingredients between the instructions issued in 1941 and 1942, caused by difficulties in supplying units with paint, is also interesting.

One can make the conclusions that the GAU and GABTU didn't come to an agreement about what materials to use for winter camouflage. Unlike for armoured vehicles, the use of lime for painting artillery was not recommended. Zinc, titanium, lead, or lithopone paint was forbidden.

«B» paint and white glue paint were diluted to the consistency of sour cream with water. The mixture was applied while warm and dried in 1-2 hours. White rosin-gasoline paint could be applied at a temperature as low as −20 degrees Celsius and would dry in 6-8 hours. White chalk was recommended in the 1942 instructions as an additional and simplest material for camouflage. It was used to apply camouflage in extreme cold or touch up small spots and hatching if nothing else was available. Chalk was also used to colour wheel rims, tires, and other elements, as well as during the preparation of positions or after moving the gun, when it was necessary to prepare the main layer of camouflage.

In 1941, the process of applying spots was as follows. When applying paint to previously camouflaged guns or vehicles, green areas are covered in white completely, and rhomboid hatching is applied to yellow and brown spots. Application of only horizontal or vertical lines was forbidden. On dark brown spots, 1-1.5 cm wide lines were applied every 6.5-10 cm. On yellow spots, every 3.5-5 cm.

If the gun was positioned out in terrain that was fully covered in snow, it was acceptable to paint the equipment completely white or reduce the distance between lines.

When painting over single colour camouflage (4BO), an imitation of three colour camouflage was used. Spots were marked in chalk, just like for summer camouflage. Then, the green parts were completely covered with white, and spots that corresponded to brown or yellow were covered in hatching with various line thicknesses. With 1-1.5 cm wide lines the distance between them was 8.5-13 cm on dark brown spots and 2.5-4 cm for earth yellow spots. This technique imitated three shades of colour by varying the tightness of the hatching.

Paint was applied with brushes, cotton packing, or simply rolled up rags. Special attention was taken to not cover moving parts of guns, bronze, copper, or anodized surfaces.

As mentioned above, the instructions that were reworked and issued in 1942 had significantly different materials and methods of application to make application cheaper and faster. Instructions to methodically apply hatching were replaced with simpler techniques.

As before, when applying paint over three-tone camouflage the green was covered completely in white. However, the brown and yellow spots were not hatched. They were covered in fine dashes and small spots that matched the patterns of the terrain. The lower parts of gun shields and trails were painted white regardless of the colour of summer camouflage. Chalk was used to apply the extra spots and dashes.

The technique used for white paint was analogous. All surfaces were split between green, «yellow», and «brown». Green areas and lower parts of gun shields and trails were painted in white. Spots marked as yellow and brown were covered in stripes, dashes, and spots to match their surroundings. Gun commanders and their crews had the freedom to choose a camouflage pattern based only on their imagination to match their surroundings.

The issues of removing the winter camouflage come spring or transition to an area without snow were also addressed. Partial removal of white paint from yellow and brown spots was allowed, and even recommended, upon entry into an area with less snow. The camouflage was later restored if necessary. Rags, water, and kerosene were used. In the cold, the paint was removed with hot water, rags, and wooden scrapers. Gasoline was allowed as a solvent only during warm weather.

In conclusions, one can see that the camouflage applied during the first years of the war changed to become simpler and cheaper, while remaining an effective way to hide equipment from sight. 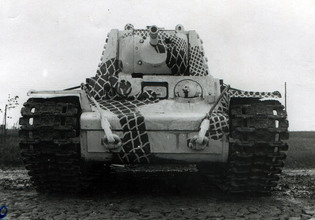 A Breast that Left a Mark in History

Highlights for Warspot: The Twisted Paths Of The Studebaker