Issues with reducing visibility of armoured vehicles arose as soon as these vehicles were first used. Like 100 years ago, opposing sides aim to locate enemy vehicles in motion, during stops, and during combat, determine their type and number, and also make the same as difficult as possible for the enemy. It's not easy to conceal a tank from the enemy, especially in winter. Areas covered in snow make dark objects (such as tanks in basic camouflage) very noticeable. How was the issue of camouflaging tanks in winter handled in the Red Army?

Guides and manuals used in the USSR in 1941-1945 describe two types of winter paint for Soviet armoured and transport vehicles:

60-70% of the surface was coloured in white. The rest was left in camouflage green, which looked like dark spots on a white background. It turned out to be useful to cover these spots in white stripes, forming a grid. This was necessary to make the dark spots stand out less, since from a distance they appeared blurred and gray, like bushes. This made the camouflage more effective from short distances, such as in ambushes. This camouflage was also useful in settlements, as the white snow cover is broken up with highly contrasting dark buildings, objects, and shadows.

Methods of application deserve separate attention. There were several recipes, differing in difficulty and effectiveness.

About a bucket of paint and 6-8 hours was spent to camouflage a tank. A car took half as much time and materials. It was suggested that the surface should be clean of dirt, oil, and snow before painting. The mixture should be kept warm during painting, and work should be done indoors with heat.

Adhesion of various substances to the tank varied, as well as resistance to precipitation and impacts. The first recipe was suggested for quick application using items available at hand, but it also had the shortest lifespan. Recipe #2 was more difficult and less accessible, as it was made at the factory, and recipe #3 took more time. However, the substance remained for longer due to the presence of glue in the mix.

Concealment on the move and during stops

A tank reveals itself while moving by leaving marks with its tracks and throwing up dirt and snow. Movement during the winter was to be done at night time, and on roads instead of open fields. If one had to move through a field, it was suggested that the tanks go in single file, following each other's tracks, so it would be harder to count the number of tanks that passed.

One method of covering tracks is by using drags. A drag could be made from anything at hand (bushes or trees tied to the rear of the last tank in a column) or specially produced materials, such as 8-10 reels of barbed wire on a pole. These devices covered the tracks of passing vehicles and made it look like the road was not used.

To reduce visibility of vehicles, it was suggested that one turns off headlights or uses light-concealing attachments, creates decoy sounds away from where the tanks are really moving, etc.

When tanks were stopped in settlements, sheds, ruins, and other large objects became useful for concealment. Covering vehicles with available materials (snow, straw, branches) was considered effective. When stopped in the forest in winter, evergreen trees were considered the most effective cover. Artificial lowering of the branches was used to conceal vehicles from above.

When it was necessary to stop tanks out in the open, they should be stopped within dark spots. These could be bomb craters, dirt thrown up by explosions, branches taken from forests, or artificially created spots (with branches, straw, or ground cleared from snow). The tank and its shadow stood out less when observed from the air.

If necessary, a tank could be covered with a model of a local object (a shed, a haystack, ruins of a house). This technique was especially useful during ambushes. It also had its drawbacks, namely decreased fire safety and difficulty in leaving the vehicle.

Ideally, a group of tanks could be concealed in one go. Cover was built in ravines, near vertical banks or steep slopes. Large chunks of snow were cut out. These chunks were stacked in walls placed one tank width away from the slope. This hiding spot was covered with branches from above, then a layer of bushes, standard issue camouflage nets, or some other layer. After this, the «roof» was covered with snow. A hiding spot like this could house 5-10 vehicles. Special care had to be taken to remove the tracks leading into the «dead end». After that, it was nearly impossible to detect such an improvised garage from the air.

Measures to conceal tanks were taken at by tank battalion commanders (development of movement routes, overall control over carrying out of instructions) and platoon commanders (choosing places to stop, choosing how to approach them, directions regarding camouflage methods).

Most of the work to conceal a tank was done by its crew. In exceptional circumstances, this work could be carried out by sappers or special camouflage teams. As a rule, these were used to create group hiding spots and to paint tanks en masse.

The measures taken to conceal tanks in winter were simple and cheap methods to reduce the visibility of vehicles during combat and in between battles. Timely and proper use of these measures increased the combat effectiveness of units and reduced losses in battle. 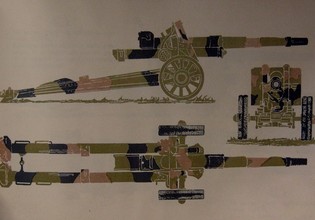 The Wasp and Its Sisters