History enthusiasts are familiar with Winterketten and Ostketten track links for PzIII and PzIV tanks. The use of these track links was a necessary measure to increase mobility in the snow and on wet, soft soil. The history of these track links did not particularly attract historians, but at the very least their existence is widely known. There are photos of German tanks with these track links and they are fond in the ground on battlefields. However, nothing is known of equivalent development in the Red Army. Let us try to fill this gap.

Even though the USSR tested various designs of tracks that reduced ground pressure and some of them demonstrated impressive results, none of them entered mass production. However, there are archive documents that shed some light on this page from the history of Soviet tank building, at the scientific approach to the study of off-road mobility, and the influence of this work on subsequent tank development.

The issue of poor mobility on soft soil was encountered by tankers along with the first tanks. Even though tracks had their advantages over wheels, there were still limitations. This was especially evident when driving in the sand, on ice, snow, in riverbeds, swamps, or flood plains. Situations when a tank becomes bogged down and cannot get out is common in our times. Work on reducing these drawbacks has been done and is still being done in many nations.

The most obvious way to reduce ground pressure is to widen the track. However, one cannot widen the track indefinitely due to limits of toughness of the metal and increasing weight of the vehicle, which will in turn require a more powerful engine. In addition, a wider track is more vulnerable to enemy fire. Designers of each tank have to find the balance between the mass, width, and reliability of track links while still ensuring satisfactory mobility.

Tanks that find this balance and obtain good mobility and speed on difficult terrain were quite extraordinary. One of them was the legendary T-34, although early tracks for this tank had issues. The T-34's success was not an accident. In December of 1938, the ABTU Automotive and Armour Scientific Research Proving Grounds performed a series of trials, the results of which formed the foundation of the research performed by the 8th Department of Kirov factory #185. The results of trials were summarized in 1939 and sent to the ABTU, Military Academy of Mechanization and Motorization, and tank factories.

But what to do with existing tanks? The RKKA had a large amount of T-26, T-28, T-37A, T-38, and a whole family of BT tanks. The T-26 tank and vehicles on its chassis were the most common, numbering over 10,000 units. Even though the T-26 showed itself well in trials of 1938, the Winter War showed that existing vehicles still have to be modernized in this regard.

Engineers from KB-1 of 8th Department of factory #185 developed two types of devices that improved the T-26's mobility in swamps and on soft terrain. Trials were performed in Leningrad, at Voroshilov factory #174, which produced this type of tank.

The first device was developed under the guidance of Engineer Shufrin and was called T-26-B. Three variants were delivered for trials, all three using track pins that were 545 mm long instead of the stock 280 mm. The diameter remained the same: 18 mm. Unlike the regular track pin, the new one had grooves on each side for a stopper ring. The width of the track link doubled: from 260 mm to 520 mm. The contact surface also doubled, reaching 28,912 cm². This measurement and all subsequent ones were made between the axles of the front and rear road wheels.

The first variant of the T-26-B used a second set of regular tracks, a full set of road wheels, and half of the return rollers. One addition was the distance collar, which added space between the regular and additional road wheels. Instead of the axle cap, the first and last return roller had additional rollers added. The cap was installed on the outer roller instead.

Track links slid onto the lengthened track pin. On the bottom, there was a second row of road wheels. On the top, two extra idlers on each side. The idler and drive sprocket were unchanged. The overall increase in mass was 1233 kg. The ground pressure was reduced from 0.59 kg/cm² to 0.34 kg/cm².

It took 660 man-minutes to convert a T-26 tank. In other words, two crewmen would spend 5.5 hours to replace the track links and add extra road wheels.

The second variant of the T-26-B differed little from the first one, aside from the outer track. Instead of regular track links, 5 mm thick stamped track links were used. The eyes were formed by simply bending the metal, without welding. All additional components were the same as on the first variant.

The mass of the additional track was reduced compared to the first one, making the conversion weigh only 920 kg. The ground pressure was reduced to 0.325 km/cm². The conversion time was the same as before: 5.5 hours.

The third variant of the T-26-B was similar to the second one, but omitted the extra wheels. The additional mass of the third variant was 430 kg and the ground pressure was 0.308 kg/cm². Two tankers needed 132 minutes, or 2.2 hours, to perform this modernization.

The second device was proposed by Engineer Zhukov and designated T-26-1/P. This device also consisted of additional track links attached to the main tracks.

Each additional track link was composed of two parts, which were attached to the outer and inner side of the stock track link. The design was not complicated. The inner part was a metallic plate with eyes for the track pins welded on. The outer part was longer. Two ribs were welded to the metal plate, and eyes for the track pins welded to the ribs. The length of the eyes was about half as much as the ribs.

The design of the track pin was analogous to the stock design: the diameter was 18 mm, same as on the original. The length was increased from 280 mm to 425 mm.

The overall width of the track was twice as much as standard: 520 mm. The contact surface increased from 14,456 cm² to 28,912 cm². It was suggested that T-26-1/P additional tracks be installed on every other track link. This way, the extra mass was reduced to 458 kg and the ground pressure to 0.31 kg/cm². It would take two tankers 2.2 hours to «dress up» their tank.

The goal of the trials was to test the effectiveness of these changes in real conditions, determine the toughness of the additional tracks, and figure out the effect they had on driving the tank.

To understand the effect on swamp driving, two tanks were tested at the same time. A production tank and a modified tank crossed the same section of the swamp in parallel. To determine the defects of each device, it was decided that each tank must drive for at least 100 km.

T-26-B variants 1 and 2 were installed on production tanks. The devices travelled 210.9 km between May 13th and 21st, 1940, 64 on cobblestones, 99.8 km on beaten dirt roads, 2.1 km on swamps, and 26 km off-road. During this time, track pins slipped out six times due to poor quality limiter rings and one extra road wheel fell off a T-26-B due to a minor design defect, where the axle cap twisted itself off.

As a result of the trials, it was determined that the changes do not noticeably affect the steering or resistance during movement when compared to a regular tank.

Tanks with additional tracks left less noticeable trails in the swamp and did not get stuck where the production tank became stuck. The modified tanks did not have their tracks slip when starting in a peat bog, and could get out on their own by rocking back and forth if they became bogged down.

It turned out that the track pins bent when driving on uneven terrain. The lack of extra road wheels made itself known. Additionally, the track pins popped out due to poor quality limiter rings. If a track pin slid inwards, it would be bent by the hull, and become useless.

The T-26-1/P was trialled in three stages between June 14th and 23rd, 1940. The tank drove for 112.38 km with this device, 65 on cobblestones, 46.3 on a dirt road with potholes, and only 1.5 km through a swamp. During trials, two track pins broke along the joint of a stock track and the additional one. Due to a slightly smaller length than the ones on the T-26-B, they did not become deformed. The tracks were not thrown while driving through a swamp, despite the testers' best efforts.

It's important to note that the testers installed T-26-1/P tracks on every track link instead of every other, which would double the additional mass and increase the ground pressure. However, this was not recorded in the report. Perhaps the testers did not consider it important.

It became clear that the first two variants of the T-26-B were useful, with the additional road wheels being necessary. Despite the harsh trials, no deformations of track pins were observed. The only thing that needed to be done was change the design of the limiter rings and prevent the axle caps from unscrewing themselves.

The third variant of the T-26-B was useless due to tracks turning inside out and slipping off the idlers.

The simpler T-26-1/P was no worse than the first two T-26-B variants, even though it had no extra road wheels and weighed less. Zhukov's variant was deemed the most promising due to its simplicity and convenience.

The final report was signed on July 20th, 1940, by Chief Engineer of the 20th Department of factory #174, S.A. Ginzburg, after which the document was sent to the ABTU and VAMM.

Unfortunately, the report disappeared into obscurity. The additional track links were never produced, despite the great help they could have been in the North, Karelian, Leningrad, and North-West Fronts in 1941-1943. 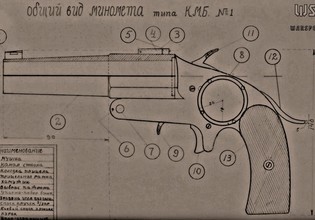 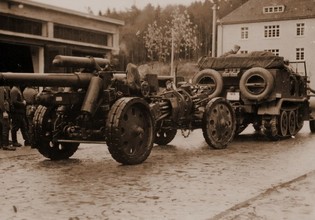 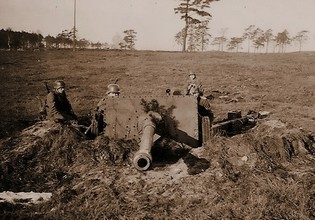 IS-7: a Titan Late for the War

Valentine With a Long Gun

Shermans at Kursk
HI THERE!