The Medium Tank M4 showed itself as an effective weapon over the course of decades of service. Tanks from the Sherman family successfully fought in every corner of the world in WW2 and after. However, these tanks still had a number of design drawbacks that American engineers had to fight to solve while the tank was already in production. One of these drawbacks was poor mobility in soft soil.

Attachments of every kind

One of the reasons why the Sherman’s off-road mobility left much to be desired was the high ground pressure. Even the prototype Medium Tank T6 didn’t have particularly wide tracks, and every subsequent variant of the Sherman became heavier and heavier. Ground pressure increased along with weight

By the time American engineers got around to looking for a fix for this problem, many nations already had experience with this kind of thing. The best known solution was the German Ostketten, widened tracks for the Pz.Kpfw.III and Pz.Kpfw.IV designed for use on the Eastern Front, as the name implies.

The USA went in a similar direction. Instead of developing a new type of track, a removable extension known as the EEC (Extended End Connector) was developed . These extensions were attached to standard track end connectors and could be used on any Sherman tank or derivative, with the exception of those that used CDP (Canadian Dry Pin) tracks. The EEC widened the tracks from 418 to 511 mm.

Vadim Antonov
/
Where Infantry Can't Pass
T-26 in the mud: tests of the most massive Soviet tank of the 30s with adaptations to improve cross-country ability

There was a suspicion that even this would not be enough, and so American engineers came up with a clever solution. The bogeys were moved away from the hull slightly, which let them mount a second set of extensions on the other side of the track, widening it to 601 mm. This modification received the index E9. Laboratory trials showed that under constant pressure a track with one Extended End Connector submerged into sand to a 7% lesser depth and a track with two extensions to a 12% lesser depth than a track with no extensions.

Practical trials were held in February of 1944. An M4A4 tank could drive through a section of swamp for the trials in third gear if two Extended End Connectors on each track or in second gear with one extension. An M4A3 tank with standard tracks did not manage to drive through the swamp even in first gear. Both tanks used smooth rubber tracks without grousers. There were drawbacks, however. Mobility improved only if the tank sank to a depth of 38 mm or more, on hard terrain they only got in the way. The extensions also threw up a lot of mud when driving, a lot of which landed on the engine deck. The new bogeys and track extensions added 317 kg of mass to the tank. Nevertheless, the idea was considered a good one. Several types of extensions were in development by June.

The variant with two extensions had the best performance, but caused little enthusiasm within the Army. It took 326 man-hours to “shoe” one tank, and the procedure called for at least two skilled welders. The idea of installing extensions only on one side was a serviceable compromise. These extensions could be installed in the field without a serious time investment or use of skilled labour.

While the Extended End Connectors helped with ground pressure, they did not help with traction. In practice grousers on American tracks quickly became clogged with mud and became useless. A proposal was made to remove every other Extended End Connector to improve grousing in deep mud or to combine them with existing removable grousers. Even these solutions were not successful, and work on a new solution, the Platypus grousers, began in 1944.

There were also special grousers for tanks with E9 running gear. The full width of these tracks was a whopping 37” (94 cm). The mass of an M4A3 tank with these attachments grew to 78,918 lbs (35.8 tons), but the ground pressure dropped to just 0.51 kg/cm². The tank successfully navigated terrain where an ordinary M4 bottomed out and recovered a bogged down tank. Unfortunately, these extensions were never mass produced, since the M4E9 was just an experimental vehicle. Narrower 32.5” (82.55 cm) extensions were made for tanks with regular running gear. Ground pressure was measured at 0.65 kg/cm² for a 78,250 lbs (35.5 ton) tank. These extensions were not mass produced either.

Platypus grousers made it to the front lines, but only in experimental order. American style attachments were tested in Italy and British ones were tested in North-Western Europe.

A report describing their testing in Europe dated June 28th, 1945, rated their effectiveness as high. Atank could not only climb out of mud with these extensions even if it was bottomed out, but also tow out a second bogged down tank. Traction on gravel roads was also improved, but on pavement the traction decreased and tracks slipped. The top speed on paved roads had to be limited to 20 mph (32 kph). It was hard to control the tank at high speeds. Tanks with these grousers were also 38 cm wider than usual, which left only a few inches of clearance when crossing a Bailey bridge.

The attachments were also not very long lasting. Even on soft terrain the lifespan of tracks with these grousers was no more than 800 miles (1288 km). The bolts holding them also had to be tightened every 30 miles (50 km) of driving on a road or 60 miles (100 km) of off-road driving. The extra weight also threatened to break off the return rollers. It took a long time to install the grousers; an experienced crew could spend a whole day on this task. Comparing Platypus grousers and EECs, the author came to the conclusion that each has their own use. The EEC was less effective in mud, but could be used without issue on highways and in forests. The EECs also did not result in increased track wear.

These extensions were considered a temporary measure to prolong the lifespan of an outdated tank. The report author realized that the future was with tanks that had wider tracks from the get-go, such as the M4A3E8 or Pershing.

Experience in Italy was largely the same. The Platypus really helped in mud, but got in the way on roads and broke off when hitting obstacles. The heavier track also led to broken return rollers and increased final drive wear when turning. Vibration and overheating of the running gear were recorded. Drivers complained about higher physical and cognitive load during operation of their tanks. The lifespan of the tracks was estimated at about 400 miles (644 km). Wear on the pavement also increased. Testers came to the conclusion that a column of Sherman tanks with Platypus grousers would render a paved road unusable, while a column of the same tanks with ordinary steel tracks would do relatively little damage.

The EEC helped in mud only a little, but also did not affect driving on a road or increase the wear of the vehicle. Welded extensions behaved better than cast ones. The former broke off without stopping the tank when they hit an obstacle, but the latter broke the track. A batch of forged extensions was also tested. Those turned out to be too strong. When hitting an obstacle, they remained intact, but the track pins broke.

Platypus grousers were very rare. For instance, the 1st Canadian Army received only 200 sets of these grousers, while one set of EECs was issued per tank. The impressions from the grousers were good and the 21st Army Group ordered 40,000 sets on March 31st, 1945. The increased wear and mechanical issues were considered insignificant compared to the radically improved mobility. The order was approved and was to be fulfilled by May 15th, but due to a lack of free industrial capacity it was eventually cancelled.

Sherman tanks with various attachments were not just compared against each other. On December 11th, 1944, the 8th Army decided to stage a competition between a regular Sherman of an undisclosed type, a Sherman with Platypus grousers, a Churchill, and a Panther. The tanks drove across muddy terrain up a small slope. The Sherman with grousers took the first place, the Sherman without attachments came last. The Churchill and Panther were about equal.

Different trials were held on March 6th, 1945, this time on a much greater scale. This time several Shermans were used, both M4A1 and M4A2 with various tracks and attachments, as well as a Churchill and a Panther tank for comparison.

The track was split into three stages. Each tank was to climb up onto a road over a steep hard slope 3-4 feet long. Having crossed the road, the tanks descended into a 9-14 foot wide ditch with 2 feet of standing water. The opposite shore was soft and muddy, standing at 3 feet tall. Tanks that made it out of the ditch had to cross an 80 yard long field that was plowed and watered repeatedly over the course of three days. The ground was silty with a small amount of fine sand and other particles.

The heavier tanks did not do as well. Both the Churchill and Panther managed to cross the ditch, but the field was harder to navigate. The Panther started off slowly, slipping badly, and soon bogged down completely. The gearbox jammed when the driver tried to reverse. The Churchill also started to slip, but managed to back out of its predicament and successfully crossed the field in first gear on a second try.

Comparisons with Panther tanks were not just performed at the front. The School of Tank Technology at Chertsey held their own comparative trials in March of 1945. Flotation and traction were judged separately. Sherman tanks with standard T54E1 chevron tracks were used, as well as tanks with all manner of attachments and extensions installed. Cromwell tanks with analogous attachments were also used.

The Sherman tanks with Extended End Connectors or shortened extensions proved most successful during flotation trials, either with removable universal grousers or without. Tracks without extensions and tracks with built-in Platypus style extensions showed approximately equal results. However, even the former group sank deeper than the Panther. Cromwell tanks sank deeper than Sherman tanks regardless of the type of track used.

Traction trials showed opposite results. The Panther had very poor traction, which explains why it was unable to drive through the muddy field in American trials. Shermans managed a lot better. Tanks with 28-78 universal grousers installed came first, tanks with grousers and extenders came second. The British variant of the Platypus did not help much and only beat rubber tracks with chevron grousers.

Like many other issues with their tanks that the Americans started working on in 1944, the low mobility of the Sherman in mud was never completely solved. Extended End Connectors were widespread, but did not help as much as needed. Platypus grousers were effective, but damaged both the tank that used them and the road it drove on. These grousers were not delivered to Europe in large amounts before the end of the war.

Nevertheless, work on improving the Sherman’s off-road mobility gave visible results. Even with minor changes, the Sherman performed better than the British Cromwell, and in the ideal case even beat the Churchill and Panther. Of course, all of this was just a temporary measure. The future belonged to tanks with wider tracks and either HVSS or torsion bar suspensions. 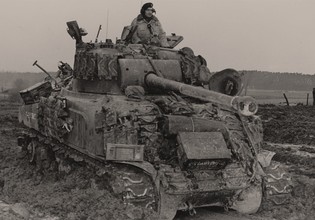 Firefly with a Stinger 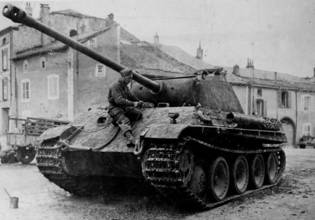 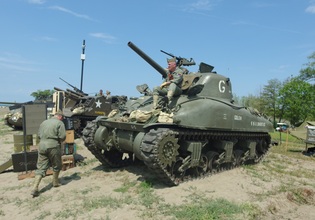 M24 Chaffee: Test Drive at the End of Lend Lease
HI THERE!