In our time, we tend to view Roman soldiers as iron men, always ready to travel to the world’s end and fulfill any order. The price tag hanging on this image is expressed in a multitude of human lives. Let’s try to look at Roman military service from the perspective of regular soldiers in order to be able to weigh the sacrifices they were making, as well as to explore their health, living standards, and chances of living to old age.

In 1983, a curious 4th-century Egyptian papyrus was published in the journal of papyrology and epigraphy, which, as it turned out later, was part of the document published earlier, in 1973. The edges of both scrolls were a perfect match, and scholars were therefore enabled to reconstruct the document in its entirety. It contained three letters written at different times at the Dux’ Office, all addressed to the prefect of the Psophis camp, located presumably somewhere in the Oxyrhynchus Oasis in Egypt. They all concern the status and military career of a certain Serapion, who should be identified as the owner of the scroll.

The first letter is dated April 17, 395 to describe the promotion of Serapion, who had served ten years by that moment, from a horseman to a cataphract. The second letter is dated 396: Serapion is appointed decurion. The third letter dates from the year 401 and includes a list of the names of 11 retired soldiers, among whom we see the same Serapion. This list contains the years of their service and reasons for the veterans’ retirement.

It is hard to say what exactly ailed Serapion. Galen, the titan of ancient medicine, described “colicus” as sharp pains in the abdomen, which, according to modern specialists, could be caused by a broad range of diseases: from intestinal infections to rheumatism. Two of his comrades, identified in the document as “crippled”, may have suffered some form of injury that made continued service impossible. Finally, one veteran decurion is listed as “sick” without any details of his diagnosis and another is identified as “old”.

All those invalided out of the army because of their illness or old age received what was known as “respectable retirement” (causaria missio). It was granted upon examination by two or three medics. The decision was made by a “competent judge” (iudex competens). This retirement envisaged the same rights and benefits as the “honorary retirement” (honesta missio) enjoyed by veterans who had served the full term of 27 years in the army. It included a cash payment and exemption from taxation, along with other responsibilities, for the veterans themselves and their families.

Since Caracalla’s time (211-217), a 20-year period of service was required for a veteran to enjoy all benefits. Those who served less were only entitled to a reduced amount of benefits proportional to the number of years served. Finally, Emperor Constantine (306-337) decreed in 325 that only those soldiers from auxiliary units who had been wounded in combat were able to enjoy full benefits in case of “respectable retirement”. Serapion and his fellow soldiers therefore qualified for a limited amount of those privileges due to their status.

The military profession was associated with severe physical tests. Soldiers were supposed to fight bravely and endure fatigue and bites of their wounds. Vegetius writes that young recruits must primarily be trained to make long marches in full combat gear. Judging by the reliefs on Trajan's Column, soldiers marched dressed in armor, carrying a helmet and shield, as well as day’s worth of rations and accoutrements. Soldier’s gear could weigh up to 20-30 kilograms. Not surprisingly, Roman soldiers were nicknamed “Marius’ mules” due to the weight of their baggage.

A modern reader would be astonished by the endurance of Vitellius’ German legions, which made a forced march of 30 miles (48 kilometers) in a single day during the Civil War of 69 and then fought equally with the enemy the following night. To achieve this, not only soldiers, but also officers had to have excellent physical training and endurance. When he commanded the army in Germany, Servius Sulpicius Galba, already in his 40s, first spent the entire day in the field exercising with the shield in his hand, and then ran 30 kilometers in his gear behind the chariot of disturbed Emperor Caligula.

The severe stress inevitably affected soldiers’ health, which we can observe from the remains that have preserved. A complete skeleton of a warrior was discovered on the shore of the Bay of Naples — one of the victims of the eruption of Mount Vesuvius, which devastated Pompeii and Herculaneum in 79 A.D. He was lying face down with his arms folded. By his side were the warrior’s leather satchel with tools, a belt with bronze plates, a purse with a handful of small coins and a sword in a sheath. The warrior was 37 years old at the time of death. He had great physique, had excellent health and was well nourished. The powerful muscles of his forearms were a result of constant exercise with the sword and shield. Apparently he was a horseman, because the bones near the knee joints had thickened from constant strain, as they always do when a rider uses no saddle. He must have been a seasoned warrior. A heavy blow to his face cost him six teeth on the left side of the jaw. There was a hematoma on the left thigh bone above the knee, obviously from a wound. The point of his enemy’s weapon had pierced the bone and a blood clot entered, which later hardened. This resulted in an easily distinguishable bump on the warrior’s bones.

Another body was discovered in 1972 during the excavation of a Roman fort in Felsen, the Netherlands. The fort, identified by archaeologists as Flevum, was captured and destroyed by the Frisians in 28. The bodies of three Roman soldiers were discovered in wells within the fort. The position of one of them and the gear found with him suggest that he had been thrown into the well tied up, possibly still alive, and then pelted with stones. The remains belong to a 25–30-year-old man who was very tall (190 cm), physically very strong, with well-developed forearm muscles. The right arm was better developed than the left one, with symptoms of arthritis in the right elbow and at the base of the thumb. The left clavicle was also affected by arthritis, a result of carrying a heavy shield.

The papyrus found in Oxyrhynchus that is dated from around 270 sheds an unexpected light on the mental health issues experienced by Roman soldiers:

“Mark salutes Antonia, Serapion, and Cassian, his parents. I have prayed for you before gods in the local temple, because no one can send prayers upriver due to combat ongoing there between the anoterites and soldiers. Fifteen select soldiers have died, let alone legionaries drafted from the reserves, those wounded and suffered in the fight.”

Mark, the sender of the letter, was a military medic serving at Alexandria. The word “suffered” was translated as χαλαστων, “sluggish”, “relaxed” in the Greek text of the letter. The choice of this rarely used term suggests that what is refers to here is neither those wounded in battle nor deserters, but probably those soldiers who became victims of post-traumatic stress disorders. This diagnosis may seem out of place to a modern reader. But we should remember that Roman soldiers were regular men, often very young men, sometimes taken into the army by force, thrown into battle after a short prep course. At that time combat represented hand-to-hand fights with blows falling from all sides. Soldiers heard their friends’ groans and witnessed their terrible deaths. Not surprisingly, some went mad.

Appian shares the story of the “slightly insane” Roman veteran by the name of Cestius who caused the fire of Perusia during the Civil War in 40 B.C.:

“Caesar decided to give Perusia for his army to plunder. But one of the Perusians, Cestius, who was slightly insane — he had fought in Macedonia and since then had called himself a Macedonian — set fire to his house and ran into the fire. The wind picked up the flame, carried it across Perusia, and it burned down completely.”

As they describe assaults and sacking of cities, Roman authors often mention similar scenes, when distraught inhabitants committed mass suicide. The attitude to this phenomenon was ambiguous in Roman culture. On the one hand, in situations where there was no other way out, suicide was perceived as acceptable or even necessary. In other circumstances, it was considered equivalent to desertion, whereas the perpetrator — if alive after the attempt — was then sentenced to death. A disease, intolerable pain and grief were considered mitigating factors, and then shame and guilt were added to the list. In this case the guilty person was spared, but sent to “disgraceful retirement” (missio ignominosa), meaning loss of service record and all privileges. Soldiers who tried to kill themselves while intoxicated were demoted to the ranks and transferred to a different unit.

It is believed today that the severities of military service resulted in 40% to 50% of Roman soldiers not surviving to retirement. In North Africa, the average life expectancy based on soldiers’ epitaphs was 45–47 years. Incidentally, only six soldiers and one centurion of III Augustus legion from Lambaesis (Numidia) are known to have been killed by enemies. The rest died of various illnesses.

In the Danubian provinces, within the near-front zone, the average life expectancy was a lot lower, about 30 years. Accordingly, the percentage of soldiers who died in battle was invariably much higher there. On the whole, a legion required some 110–250 recruits annually. However, some of the surviving inscriptions evidence that in war time some units lost up to 40% of their personnel, and had to find new recruits to ensure respective replacements. The same happened during mass epidemics.

It is harder to say how long a veteran would normally live after his retirement from the army. In Lambaesis (Algeria), a soldier had a slightly higher chance of living to the age of 45 than the local civilians. Apparently, soldiers’ higher life expectancy depended on medical care, bathing culture, and stable nutrition. After the age of 47, survival chances of both population groups equalized, and then, as they got older, the mortality rate among the military grew higher in comparison with the civilian population. The same was true for the Danubian provinces, with one peculiarity, though — soldiers’ life expectancy was already lower compared to the civilian population as early as after the age of 30.

The overall mortality rate of army veterans was somewhere in between the free population and slaves. Apparently, the Roman army successfully sucked all of a soldier’s vitality out of him right until the moment it was time to get rid of him for good. 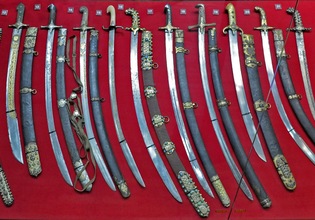 Museum of the Polish Army 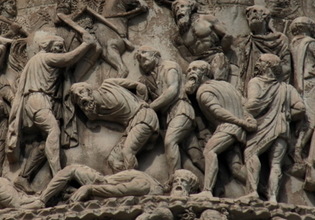 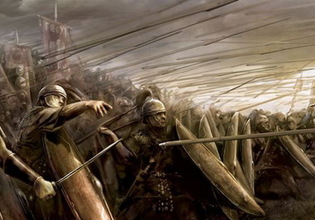 War of the future: a perspective from the 50s

Highlights for Warspot: Tales of the Teutoburg Forest

The Greens: the Beginning
HI THERE!